We were back to this food court last weekend after a short break. Of course, a fresher choice as we usually go to 2 or 3 eateries and kind of bored of having the same stuff.

Unlike those places we usually patronise, there are some dishes we can't find there. Like dim sum. The dim sum in this Premier Food Republic was alright and decent, and hubby quite enjoyed its lo mai kai. Beside lo mai kai, he also ordered har kaw and bacon wrapped dim sum. That was what he had last week.

And this was what I have that morning. Never tasted the Sarawak laksa in my previous visits so I was excited to give it a taste.

Good choice as it was nice but what even nicer was I found it served chicken feet as well!! So I ordered a small bowl of Sarawak laksa (RM8) and a bowl of chicken feet (RM5). Of course the chicken feet was for sharing among me and hubby.

The Sarawak laksa was rather on spicy side; too 'lemak' for me. But overall, it tasted alright.

And as Mid Autumn festival is next week, we bought some mooncakes to uphold the tradition. There was a Mooncake booth in Aeon Mall so after our breakfast and a short rest at home, we headed to the mall to get some mooncakes.

Actually bought a box for my grandma as we were visiting her in the afternoon. We bought a box from Oversea for her and at the same time, we bought some for ourselves to enjoy. 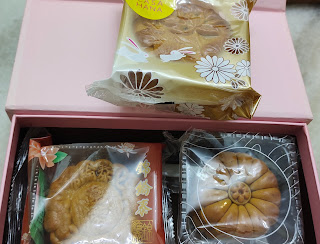 The mooncakes we have, 3 different brands. Casahana, Kam Lun Tai and Oversea. Not cheap and I can't imagine how much they will cost next year!!

Wow! Your Sarawak laksa looks so tasty with so many prawns. Spicy I will have to tahan tahan spicy when eating it. Good that all of you eat chicken feet. I also like to eat braised soft chicken feet. Dim sum place with a variety of dim sum choices is very good, I like to go to dimsum places like this. Thanks for sharing the price of mooncakes. Ya, buy some mooncakes to have some mooncakes festival mood. Yay! Any lanterns for your children?

Nica Plus sent me a box of gelato mooncakes that day - post in my blog tomorrow! Other than those, I am not buying any- I'm on a low/no sugar diet.
Dunno when I can get to go for some really good dim sum here - next week perhaps. School holidays. Otherwise, every morning, my girl will be at work, no way we can go.

I am drooling all over those yummy dimsum!

We do have leftover lanterns from last year. Somehow my kids outgrown so not that crazy about lanterns. Lol.

I am sure your grandma must be very pleased with the mooncakes that you bought for her. These days, there are so many varieties and flavors. Usually the older folks prefer the traditional ones.