It was 29 August. And we woke up to a very foggy morning. When sending Jan to school early in the morning, the visibility was rather poor; hardly can see the road. Furthermore it was dark when we went out around 615am. Even around 630am when the sun usually is rising, it was still very foggy and blur to see well.

Photos were taken when I was on my way home which was around 640am. Luckily it was clear later in the morning. But not when hubby and I went out for breakfast around 730am, as some parts were covered with fog and not yet clear. 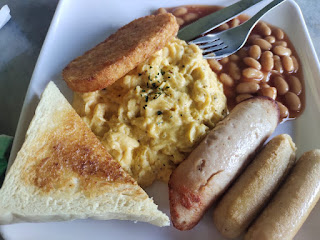 My man was craving for big breakfast again, and his choice for a nice Western breakfast was this food court which was on the other side of Batu Kawa. He liked it very much and sang praises especially its scrambled egg. Very buttery and garlicky. He got his share of breakfast while my choice was this pork kway teow soup.

RM8 for this simple, comforting noodle soup. Good enough to warm my body and last me till lunch time, which was after I picked up both Jan and Jamie and reached home before 1pm.
Posted by Rose world at 10:48 AM

Usually if it is foggy in the early morning like that, it will be very hot later in the day. I love both of what you two had for breakfast.

Foggy mornings are very mysterious but must be careful when driving. Very nice enjoying couple breakfast together. I like to eat baked beans and toasts with the eggs too hehehehe! My spouse would like the hot noodles instead. Tasty! 👍

I love big breakfast, But now mine won't have baked beans and bread.

We too have our share of foggy mornings due to the rainy season. Both the big breakfast and pork noodles look so good. I am hungry and looking forward to my dinner.