My man flew to Sibu for a night to attend to a funereal service of a cousin's husband, who passed away while on duty as a skipper last week.

On Friday afternoon, he flew back with my brother-in-law. After dropped my bil home, we decided to go to Expert Kopitiam for an early dinner. It was just slightly over 5pm then and we had a drizzle.

I went for the teppanyaki chicken from the Topanga stall for RM6.90. 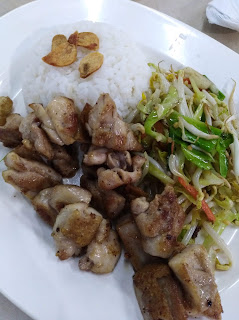 There was few new stalls in Expert Kopitiam in RH Plaza that we have yet to try.  Newly constructed stalls at the back of the coffee shop which house a pizza stall, Thai stall, satay stall and grilled pork stall. 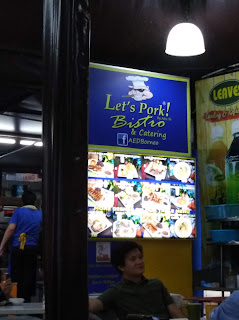 Apparently this Let's Pork Bistro is quite well known but we didn't try it out that evening. Instead another stall of it, Alex's Pizza which operated by an ang moh. 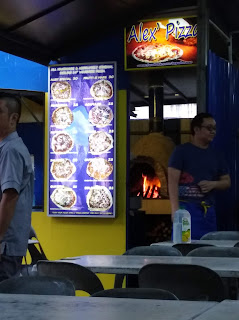 Woodfire pizza. That sounds good. Not many woodfire pizza served in Kuching and we bought pepperoni pizza (RM28) for supper. 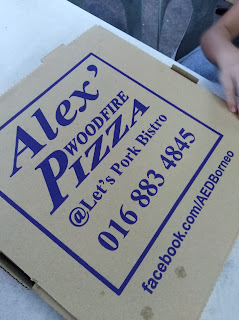 Initially my kids wanted to have pizza for dinner at the coffee shop but the oven wasn't ready yet. It took quite sometime for the oven to heat up. So after finished our dinner, the kids tried the luck to order a pizza. Thankfully the lucky star was on their side and the oven was ready to bake. 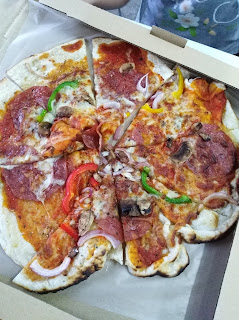 Our supper of freshly baked pepperoni pizza. Thin crust. It was nice, nothing to shout about. The kids were happy to have it as supper, that for sure. 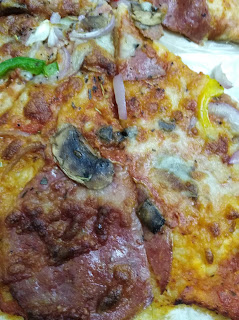 I'm sorry to hear about your cousin's husband. The woodfire pizza sounds good. I would have enjoyed the pizza.

Condolences to the family.

Condolences! I used to go to Expert when I was staying at the hotel opposite. I hear the hotel is now very run-down, cheap but no class at all, not like before.

wow ang moh made pizza
worth to give it a try

I'm sorry to hear about your cousin's husband. Deepest condolences to her and family.

Nothing beats authentic wood fire pizza. I must order one if I see one. Looking at the shape of the dough, it also shows that your pizza is hand-tossed. My favourite!

My condolences. The teppanyaki chicken looks good, once in a while, I love to eat Pizza

Sorry for the loss during this festive period, dear. Here's wishing you a blessed X'mas, with love from Singapore! xoxo