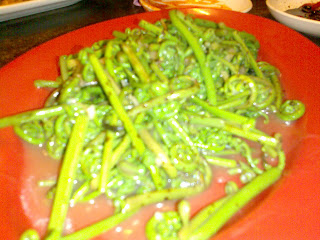 Midin is a type of fern. It is quite similar to pucuk paku that is popular in Peninsular Malaysia. It is highly consumed by the locals and easily available throughout the year. It is commonly found in fresh water and swampy area in the Borneo.
The front tips, with or without open or expanded leaves are used traditionally as a vegetable. Fronts with very narrow modified leaves bearing the spores for dispersal are not usually eaten. The fern colour varies from light green to dark green or even different shades of red.

It is traditionally consumed by local native and they personally collected the ferns near fresh water areas and swamps. However, since it started to be eaten by other races, it has become a common commodity in restaurants and coffee shops' menu. Midin is much sought after for its crispy texture and great taste. Midin is usually served in 3 equally delicious ways - fried with either garlic, belacan, or cooked with red wine or white wine! Yummy! 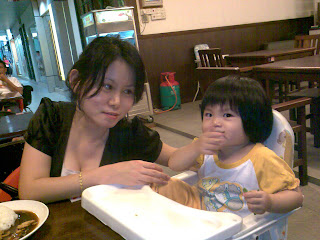 What a cutie - chubby cheeks and all!

ps Thanks for your vote.