I went to Galacity for breakfast one morning with hubby and Jan.  We wanted to try new place as we were bored with few choices in our area.  And some more, we were hunting for a good dim sum around Kuching.  We understand that our favourite dim sum restaurant no longer serve dim sum; they only maintain their Chinese and Asian dishes and ala carte now.

So, our  search for dim sum made us came here, but we could not find that dim sum shop that we came for.  Ended up with this food court in Galacity.  Many food courts and coffee shops there, but this cross-junction with 4 surrounding food courts (Heng Ki Kopitiam is one of them) attracted us. It was full house even though it was around 8am in the morning. Luckily we managed to find a vacant table for the 3 of us.

Jan and I went one round to check out on the stalls. So many stalls, so many choices, really can't decide what to have. There was one dim sum stall in one of the food courts, so hubby went to order some to try.

And prawn chee cheong fun from another stall. What a big portion of ccf; but taste-wise it was just so-so. Rather tasteless and the ccf was rather thick.  I prefer the one from this food court in Batu Kawa.

As for the dim sum, hubby ordered only 4 baskets.  Not much choices according to him.

siu mai
No, not that good.  We still like the one in Boulevard Restaurant although the dim sum here were cheaper (around RM12.50).  Rather bland in taste, it was so-so only. 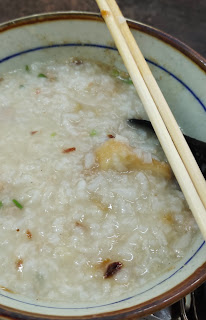 Hubby ordered meat porridge from the porridge stall.  He enjoyed it with a century egg (which I didn't take shot of). Initially I ordered fried kway teow with clams (RM7.00) to enjoy there but since we had dim sum, I could not finished my kway teow.  So takeaway for the fried kway teow and char kueh. Jan had fried mee hoon (RM4.00) from the same stall.

We shared the char kueh for lunch. Not that salty though although I requested for the salty version instead of sweet and mix taste. Anyway, it was good enough for me.

char kueh (salty version)
Posted by Rose world at 8:47 AM

I used to enjoy the dim sum at Tun Jugah and when I stayed at Holiday Inn, I would walk over to tapao some of their selections home. Very nice, at the time - they say they came from Lok Thian, halal ones, of course.

I like dimsum...sorry that they weren't that good. Char kueh looks very appetizing though.

Wah, all the people including you all are so diligent to wake up so early to go makan. 8 am already full house. The ccf must have more other flour than rice flour in the ccf, that's why you say not nice. If the ccf is thick n soft n only made with rice flour then should be very tasty.

i don't think i would wake up early for dim sum...wanna sleep more on weekends!

I love the variety found in dim sum.

Too bad the dim sum didn't live up to your expectations.