A time of giving

600am-----Woke up early today as today is my company's Activities Day. I participating in a treasure hunt, organized by my company. It is part of the Christmas activities that we have. The other part would be gift exchange on the Christmas Eve. Everyone supposed to arrive by 830am but due to rain, mostly were late but we still manage to start on time. There were 20 of us and we divided into 6 groups. The event kicked off at 9am after briefing by the organiser and each group is given clues to the next destination. So we were going around the city area along Main Bazaar to General Post Office searching for clues. Each team must took photographs of the clues and at the end of the event, show the photographs to the organiser. Team with most correct photographs declared winning team.

This is my first time participate in treasure hunt. In the past, I used to be the organizer and part of the team that set up questions and clues. So been in the other shoe (participant) is pretty different in the sense of finding answers to the questions. There were drizzle, thank god not heavy rain. It was rather cold walking with umbrella along the Golden Triangle searching for clues. 2 questions required us to buy the items back as proof. One is condom and the other one is 100Plus canned soft drink. When we back to the office, we were given task, i.e. wrapping present in most creative way! That is harder than walking and finding clues around the city. 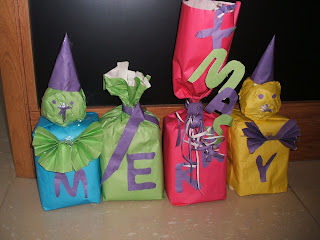 1130am ....My team came second. Guess what we get? Our own wrapped present! LOL! The last team arrived actually declared champion as they got all the correct answers. After the treasure hunt we were treated to lunch. I guess everyone was damn hungry from the running, so we nearly finish the packed nasi lemak. 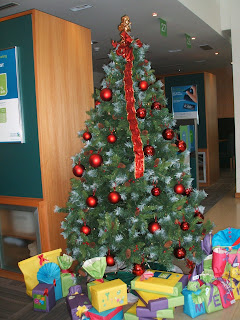 1230pm ----- Reached home after picking little gal. After settling her down and me taking bath, I was damn tired that I was knocked out cold. After my nap, I decided to wrap my presents that I bought on Monday. Yeah! Still not enough from wrapping presents in the office, you must be wondering!! To be exact, presents for hubby’s siblings. I have never been a good wrapper, so you see, the wrappings did not turn out good. Some more, with hubby’s help, the presents look funny. I bought myself a mug (tea mug as it comes with a strainer and lid) from a friend’s gift shop in Green Heights Mall. Always mean to get myself a new mug, to be used in the office. As for the presents, we shall put them under the Christmas trees on the Christmas Eve. Each present is attached with a card, so everyone would know which present goes to who!! 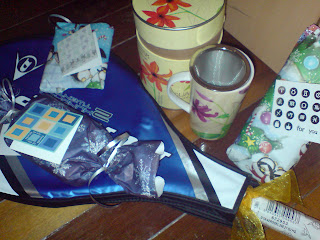 As for tomorrow, we would be going to MV Doulos to check out on some Christianity books. Hubby has never been to the ship so he is asking me to accompany him. You can say that he is a book collector. He can spend generously when it comes to books!! The last time MV Doulos was here, I visited it with my sis and a friend. Did not get anything then. Find out more about MV Doulos here .

950pm ----Yawn! Good night everyone! Tomorrow is another exciting day, granting no rain! It has been a wet week in Kuching and I can feel the cold and fever are coming. The weather is too cold till my bones are chilling!! Bbbrrrr!