Hubby went for his overnight fishing trip end of last month. Stayed in a fishing village in Santubong. Not a fruitful outing as he did not get any catch but it was nice all-men outing so he did not complained much.

The next day, which was a Sunday, they woke up early and decided to went back to Kuching for breakfast.

Breakfast place was at Rock City Cafe in Rock road (next to Mita Cake House). We rarely went there. Been there once or twice but that was ages ago.

So, hubby and his friends had their breakfast there and he bought takeaway for us at home. Char kway teow!! 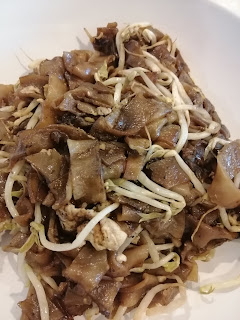 It was very nice. The wok hei, it was well fried and I enjoyed my noodle very much.

By the way, if you haven't read in news, they have finally resolved the correct spelling for kway teow in BM. It is spelled as 'kuetiau' now in Bahasa Melayu. You can read it from this site.

A rose by any other name... Much ado about nothing. One place in Sibu, you order kway teow goreng and Penang char kway teow, they will come out different!!!

I guess the spelling is only important if it is used in a composition for a BM exam.

My belated dad also loves fishing. Whether it is kway teow or kuetiau, it is the same inside the stomach lol.

This is my childhood favourite and I always asked for extra bean sprouts and chives with it :-))

I love fried koay teow (I don't like kuetiau LOL!) that has wok hei, so appetizing!