Our breakfast yesterday.  Pork porridge, century egg and fried fritters.  All were bought from outside. Yes, one of the morning when I was lazy to cook. 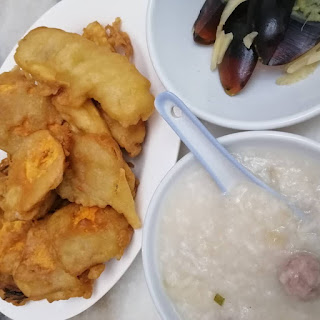 I bought the pork porridge and century egg the day before, in the evening from Big One Food Court. 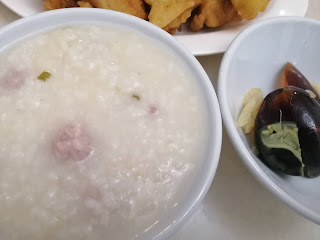 2 packs of pork porridge (RM4 each) and 1 century egg for RM2. Hubby likes century egg, I don't eat it.
I heated up the porridge and the boys got to take them before heading to school. After dropping them, I went to Y. Y. Cafe  to buy fried fritters. Hubby and daughter woke up later to enjoy the fritters with the porridge. 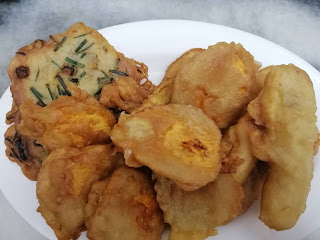 A comforting breakfast, we don't mind having porridge once in a while for breakfast.

My girl has not gone back to school yet and my problem is I will tell myself I will go out first thing in the morning to buy this and that for breakfast and when I wake up, I will feel too lazy and decide not to go in the end.

I also took porridge two days ago, dine in and then bought for dinner too cos their porridge is nice... *got MSG* sure taste better...hahaha..

i like eating porridge with fritters. Such comfy food and snacks!

I usually don't like porridge but I make an exception for pork porridge especially the ones with organ meats! But long time already have not eaten because there is none near my home.

Hubby and I like porridge too, it can be any meal of the day. Hubby is a fan of century eggs. I like the fritters. RM5 is very cheap.

I love to eat pork porridge and century egg too. Oh mine, the fritters look tempting!