As gifts to those relatives that gave "angpow" and hampers to Baby Jay on his "Full Moon", in return we are giving them boxes of mooncakes. At first, hubby was thinking of ordering cakes and give them out. However since Mid-Autumn is here, I suggested mooncake as gift. It does sound more meaningful to present them mooncakes instead of cakes.

So hubby bought mooncakes from Hei Yuet Thong. Hubby has tough time deciding what to get as they have many choices, but in the end we went for Lotus Paste. We love its packaging. Don't you like its Chinese ancient coin in front of the box?? 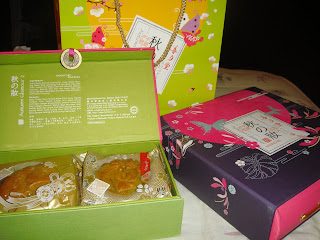 Hubby also bought 2 mooncakes for me; one is Low Sugar White Lotus and another one is Golden Floss. I still like the traditional lotus paste mooncakes, but since hubby wanted to try new flavour, so I don't mind him buying them. I am not so much of an adventurer in trying new flavour, especially when it comes to sweet food like mooncakes.

We haven't taste our mooncakes yet. Maybe we keep it till the Mid-Autumn which is next week, where we can enjoy our mooncakes with lanterns and under a full moon! *smile*
Posted by Rose world at 9:02 PM

yeah those packaging is very presentable as a gift to relatives & friends!