Maybe it is year end weather. Now the sun is out so early, by 620am, it is already super bright and sunny!!
It was kind of nice to drive out early in the morning. Less car, no stress on the road and feel good to enjoy the sun. It was the case last Sunday when I drove my car out with hubby for breakfast.
Our destination was this coffee shop in Bormill. The last time we have been to Abundance Food Centre was many months ago for the Bishopsgate mixed pork noodle. Hubby and I dined in the coffee shop that time. Quite a crowd back then as it was a public holiday. And we were there around 8am which was considered peak hour for breakfast. 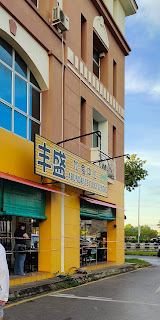 But last Sunday, we were early. Really early as we reached there slightly after 630am. And the stalls were just starting their business, heating their stoves and preparing the ingredients. Anyway, we were the 2nd customer in line as a lady was even earlier and waited for her order to be ready.

I went for Sarawak laksa as it has been a while since I tasted one. A friend recommended its laksa but he had the special one with big unpeeled prawns.

For me, I went for the normal Sarawak laksa (RM7). The portion was good enough for me; not too much. And I like my prawns to be peeled, less work. Lol.

Taste-wise, it was alright. Not too strong in flavour but if you like mild flavour like I do in the morning, this is just nice.

Hubby had the Bishopsgate mixed pork noodle set. It was satisfying, according to him. I guess he missed such comfort food while away in Sri Aman.

We brought the above from the kuih stall. Taufu fa, ang ku Kueh and you tiaw for snacking. RM14.90 for all. As for kids' breakfast, we brought 1 set of the mixed pork noodle and 2 kolo mee. The soup were shared among them.

We left just after 7am and by then, more people was coming in for dine-in.
Posted by Rose world at 8:48 AM

Oh? I thought the Bishopgate noodles would be that Noodle Descendants shop in Padungan? I went to eat at Bishopgate many times in the 70's and even later. So so so so so crowded, that small shop. I only came to know about Kim Joo much later.

Here, it rains a lot - all through the night until mid-morning or lunchtime. That is why I seldom go out as I do not like going around in the rain. If the weather is fine in the morning, it will rain mid-afternoon. Terrible!

If too early, hubby will complain that his stomach hasn't awaken yet lol! I noticed that more and more people are coming out to dine-in now. I prefer my laksa to have stronger flavour. Kolo mee looks nice.

Ang ku Kueh looks good. I like that pork noodle too.

I also prefer the prawns to be peeled. The kuih sets look tasty. I would want to eat that. Yummy! 😋😋😋

Both of you are always up early for breakfast.

I also prefer my prawns to be peeled cause I'm kinda lazy to peel while eating laksa. As for the laksa, I prefer the one in strong in flavour.

i like my prawns peeled too...lazy to peel and don't want to dirty my hands.