He made it looked easy

When my man worked himself in the kitchen, most of time, he will ended up with a surprise. Or rather, surprised me with his cooking skill.

It was a Sunday, before Gawai. He had a craving for steamed egg. So he took over the kitchen to cook his version of steamed silky egg. 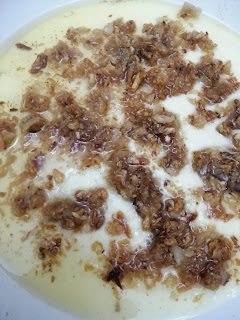 First attempt
Steamed silky egg custard with preserved radish (chai poh) topping. It was good, with the fried radish and garlic mixtures on top. You could have more than 2 bowls of rice with only this dish!!!
The egg custard was done so well. It was silky and smooth. I wished I took photo to show how silky and smooth but it was too tasty, I forgot about the photo! The topping added the flavour to the custard. But your mouth will have that garlicky and radish aftertaste which I don't like much.
He made again few days later. This round, I remember to take photo of the custard when dug in but it was firmer than his first attempt. I prefer the softer version but this one was nice as well. 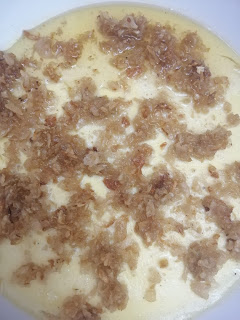 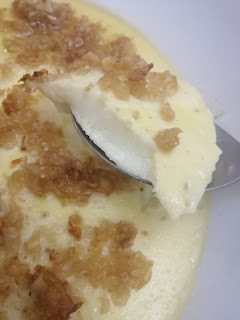 Egg custard
Ingredients:
125g preserved radish (chai poh)
3 - 4 garlic cloves, pounded
1 tbsp cooking oil
2 eggs
60ml water
Water for steaming
Methods:
1.  Add preserved radish in a mortar. Pound till mince (or you could use blender to blend well). Dish out and place in a bowl. Use the same mortar, pound the garlic cloves. Put in another bowl.
2. In a pan, heat up about 1 tbsp cooking oil. Add preserved radish to it, saute under low heat. Continue stir till it brown (but not burnt), then add in the minced garlic. Mix well and cook till the mixture is brown. Turn off heat.
3. Prepare the steamer. In a mixture bowl, crack in 2 medium sized eggs. Mix with water, stir well. Add a little bit of salt and pepper. Sieve the egg mixture in a steaming bowl. Steam under high heat for about 10 minutes or till the egg is cooked but not firm.
4. Pour the preserved radish and garlic with a bit of the oil onto the egg. Serve immediately.

I like to eat steamed eggs very much! He is so skillful, can cook smooth smooth steam eggs. Yummy! 😋😋😋👍👍👍

Wow! That looks and sounds very tasty. I must try this recipe and I will look for chai poh tomorrow.

Yumz. We love silky soft steamed egg too. Next, I am going to try adding chai poh and I know it will taste good because I love chai poh. Thanks for the recipe. Wish my hubby could surprise me in his kitchen skill too.

Very appetizing and tasty! Lucky you having someone to cook for you :-))

He is so patient to sieve the eggs to get it to be smooth smooth smooth! Yummy! I am like you, prefer not to have the garlic taste in my mouth. 😀

What a great hubby you have in the kitchen. He puts me to shame when cooking is mentioned. I do not even know how to steam eggs like him. Bravo! Now I am hungry looking at the photos.

Silky soft steamed egg for me anything. What's more with chai po, even more sedap. Ya some men can cook. Some even cook better than women.