My family especially the boys have a craze for cup noodles lately. It all started with Jamie, who was craving for China-made noodle cup a couple of months ago. He remembered that he tasted a nice noodle cup during our holiday, so he has been nagging to buy it. 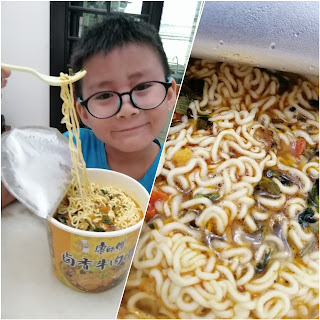 Since then, hubby has bought some but different brands and flavours home. Mostly beef broth flavour from China. Most cost more than RM10. Cup noodle isn't cheap due to the packaging and cost even more for imported noodle. 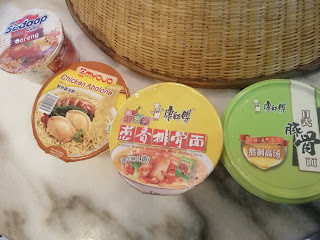 I personally preferred the Indonesian Myojo chicken abalone flavour. Noodle was more springgy and thinner than those from China. China noodle looked like mee pok, but their texture was nice as well. 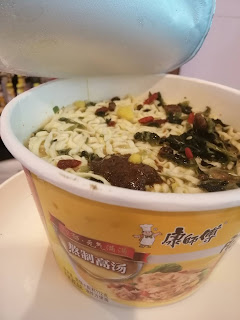 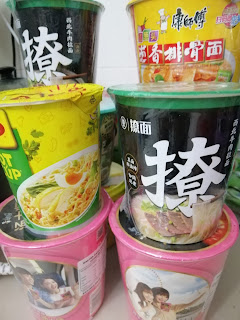 Convenient when the children are hungry, they can make themselves
On our last visit to Emart, we saw this mee cup. Mie Sedaap Cup?! Our favourite instant mee goreng at home was Mi Sedaap, without the 'e', after Mi. Same brand?? Packaging was similar though. Anyway, I bought 1 cup home. 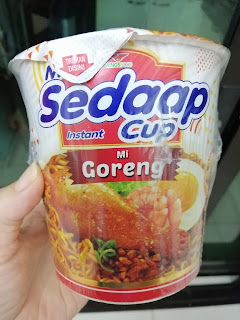 Jan took the Mie Sedaap one morning. After read the instruction, she did her own noodle. 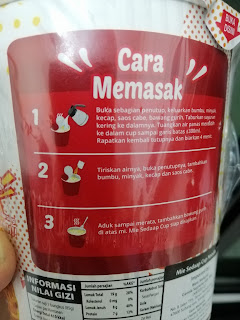 Added the mixed vegetable with warm water into the cup. Waited for 4 minutes, then drain the noodle, and add the remaining seasoning and garnish to the noodle. 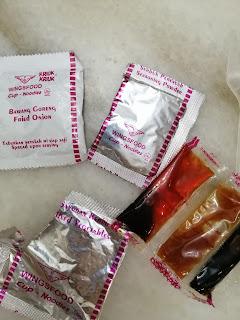 Ta-da!! Her breakfast was done! Tasted better than the normal instant Mi Sedaap, I have to admit. 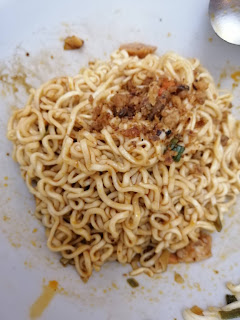 As at this moment, we still have few cups in the pantry. Somehow the craze for them has died off. Lol. We will try to clear them up soon as their expiry dates are mostly in last quarter of the year.

"Cup noodle isn't cheap..." That, I would agree. Bought two the other day, tried one and it was very nice but RM6.50 each! Much cheaper buying the noodles from the shops...but I guess once in a while is fine. Buang gian...and if the kids want it, we parents will never say no, right or not? LOL!!!

What, the mi sedaap cup is nicer than mi sedaap in the packet? Make me so curious 🤨

I seldom buy cup noodles, dunno why just don't have the urge to buy them. Good that the children enjoyed eating cup noodles. Jamie sure have a very good memory of it in china to ask for it.

I have tried the cup noodles in China several times. I found them rather too big cups and some of the beef or pork smells were overpowering. However we did enjoy some lovely flavours. I could easily find 20-30 different cup noodles in any supermarkets in Shanghai or Beijing. They have a very huge market and choices.

I always brought along our Maggi or Mie Seedap cup noodles with me whenever I visit China as getting the right food to eat could be a headache sometimes in rural areas.

some time ago, i tried some cup noodles bought from China in my previous trip, the flavoring is too strong/overpowering for me. I think i would stick to the good ol' Maggi packet mee.

You have tried so many. It is definitely convenient for a quick meal.

I remember having cup noodles was a luxury especially during the time I was overseas traveling, cos that time I didn't like to eat western food and taking these cup noodles along were a great consolation! hahaha...

I know this brand Master Kang, they have drinks under this brand too.

I just bought a pack of Indomie Mee Goreng from the supermarket last night.

Seldom buy cup noodles as like you said, they are so expensive.

I can't believe that this man is so real, how can I thank you enough, I can't fail to testify about the good things you have been doing for me and now you still went ahead and do same for my friend, please everyone if you have anything disturbing you please your solution is hear with Dr.osupalagba the great spiritualist who can solve any problem in a twinkle of an eye. No matter the problems, whether spiritual problem, you want to get your ex back, promotion in your workplace, spiritual cleansing, fruit of the womb, mental illnesses, protection for gun, protection for cutlass, protection for bottle, protection for snake and scorpion bites and cure. Are you a victim of any of the above listed setbacks, you can contact Dr.osupalagbavia Email: osupalagba.temple@gmail.com