Hubby took a day leave on a Monday to finish some personal things at home. After that, we went out to a nearby courier shop to drop off 2 boxes to be delivered to Kapit.

After that, we stopped by this coffee shop for an early lunch around 1030am. Considered brunch  during such hour but we took it as lunch.

On our previous visit, we spotted a Foochow stall at the back. Dapur Foochow was the name, literally translated to Foochow Kitchen. It opened rather early when we had our breakfast before 7am back then.

Hubby said that he would like to try it out on our next visit so when was the good time to try it but that morning after done with our errand.
A friendly Foochow lady mending the stall by herself. And the starting of Foochow dialect in the air between her and my man as my man did the ordering.

He had the Kampua in soy sauce. Hubby said it was authentic enough. He seemed to enjoy it.

He also had this liver soup to go with his Kampua.

I ordered from the chu char section of the Foochow Delight stall and ended up with fried kway teow. I have to say the kway teow was pretty tasty. I enjoyed it very much.
The lady has quite a list of dishes on her menu. I wonder if she is the only one doing all the preparing, cooking and serving. I definitely did not see any helpers around the stall that day. Sure not easy to do everything by herself if so.
Nice food cooked by her. And we did came back for more of her dishes. 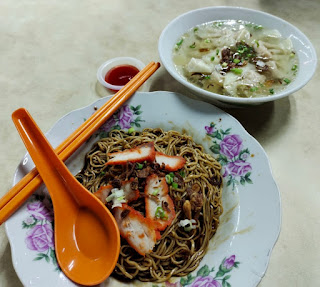 On our next visit, we had Kampua and pian sip soup. A nice breakfast, a change from my usual kolo mee breakfast.

And on our latest visit on Christmas Day, hubby and I ordered its Foochow fried noodle. So, so good. We loved and enjoyed it every much.

It has becomes one of our favourite breakfast spots now. While hubby was home for holiday, we had been patronised this stall quite frequently in the morning.

Looks good! No wonder you people have been going back for more.

Food looks really appetizing. I would love to try that liver soup!

Sounds and looks good and delicious. I would love to try the kolo mee and fried noodle.

the noodles look good! i would definitely go to this place too for the kampua noodle...yummmzz!

Liver soup looks good. I think I owe you a reply on the unknown item. I suspect that it is beef tongue.