Eat out on Saturday

One Saturday morning, hubby and I went for our breakfast in our usual coffee shop, Y. Y. Cafe.
No, I did not have kolo mee but I opted for fried kway teow instead. RM5 per plate, it was alright but lack of the wok hei, I felt. 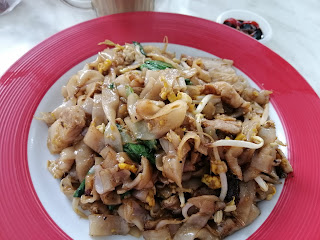 Somehow the stall was not consistent as some day, it serves good fried noodle with nice wok hei and taste but other day, it was rather disappointing.
That morning, they used pork belly in the kway teow which was unusual.  I much prefer char siew in my fried kway teow. 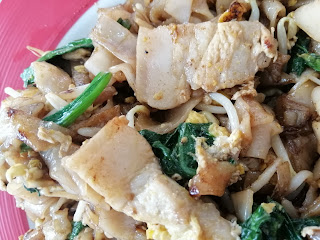 That was our breakfast which we had around 8am.  Then we went out to meet up with hubby's friends who came over from Song.  Golden Arch was our meeting venue.
Somehow hubby and I ended up with brunch at Golden Arch, slightly before 10am!! 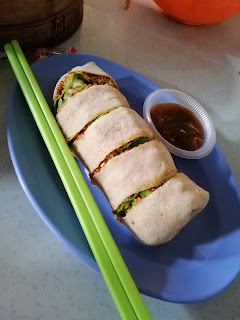 Hubby ordered this popiah to share around the table for 5 persons. Our friends already finished their food while waiting for both of us to arrive. Hubby also ordered 2 bowls of Sarawak laksa, but I could only finished half of my bowl while the remaining, hubby helped himself to it. My breakfast hasn't digested then, so I could not finished my brunch at all. 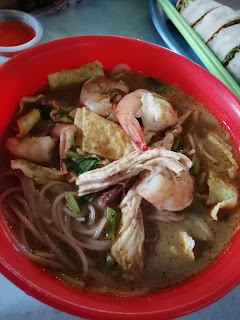 We spent almost 2 hours there with friends. It was great to catch up with them.

Golden Arch laksa among the most popular in Kuching. Popiah looks good. Kue toau too, better than those at many places around here.

CKT with no wok hei is not nice to me. I really miss popiah made with fresh skin. I can eat four! LOL!

I like popiah but these days can't find nice popiah.

RM5 for a plate of CKT is kinda cheap! I don't mind char siew or roasted pork...both are still pork...LOL!