That I have been on bad mood lately.  Either it was the hot weather, the womanly thinggy or certain people's silly remarks and doings that turned my mood swing.  But I rather forget them now.  And thanks to you for your concern and kind comments.  It feels good to know that you guys really care.

On cheerful note,  what have I been up to lately?

Firstly, I got a new toy!  Hubby bought a new Samsung Galaxy Note last week.  So, I have new toy to keep me occupied. 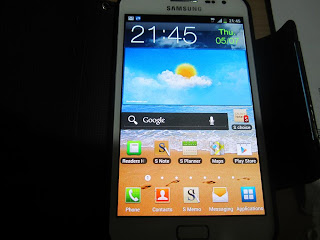 Secondly, I found some photos in my old bookshelf in my parents' house!  Oh boy!  My idols when I was in my teens.  *wink*  Dont tell me you do not idolise anyone.  These photos were given to me by a Hong Kong pen pal.  I used to have few pen pals back then and we communicate through mails, not like Facebook or emails nowadays.  And we exchange our pictures too.  I still keep them in a photo album.  So how surprised I was when I found the album the other days.  Most are from overseas like Hong Kong, Singapore and Korea.  I wonder how and where are they now.

I always love those waiting and writing process and sending gifts through mail.  But I lost touch of all my pen pals after few months of writing.  I guess we get bored easily.  Lol!﻿ 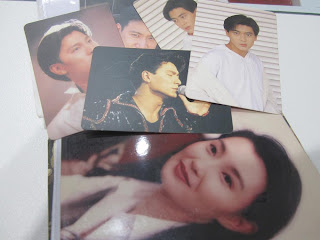 So those pictures are my fond memories of my teens.

And I have been addicted to reading again.  Not only novels but magazines.  I started to stock up my magazines again after a long time.   Since we are going to have a book shelf soon, I need to start to plan my books well. *wink*

Labels: Activities, craft and hobby of mine, My thoughts and mumbling

I have quite a number idols at my teen. I still have a few idols even at my age now. hahahaha! Why not? By the way, cool phone.

my old cupboard in my parents house are still pasted with my idols posters !! margie tsang!

Coffee Girl, no. Not Aaron Kwok. He has never been my idol. hahaha!

Lena, yeap, still some more things to dig and discover. Make that another day. hahaha!

Ya, agree with small kuching, looks like we are of the same era, Maggie Cheung was my idol too! :)