Phuket is a no stranger to discovering fresh seafood and flavourful Thai food. Thai cuisine is rich of spices and herbs which bring out a beautiful and tantalizing flavours and colours to the dining table.

We were fortunate to be treated to local cuisine while we were in Phuket. First night we were on our own and we managed to hunt down good and warm food at the roadside stall.

The next evening, hubby's Thai friend and family joined us for a sumptious Thai cuisine in King Kong seafood. No photos as everyone was hungry and dug in when the food was served. However I enclosed the FB link to this restaurant. The food was good. 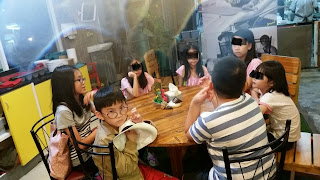 A table for the kids in King Kong

The next day before we were off to Naka Noi, we dropped by this place for a brunch first. 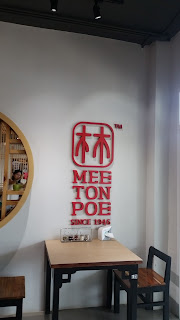 Not authentic Thai cuisine but Thai-Chinese fusion restaurant. A place that is known to serve Hokkien noodle and Chinese specialties. 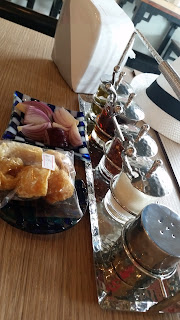 Condiments on the table. Oooo. I saw pork lard! Everyone's favourite. No one touch the raw shallot though. Lol. 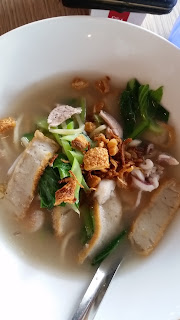 I ordered this seafood noodle soup. Surprisingly the broth was good and clear with some pork lard pieces on top. Not much noodle but it was fine with me since we had American breakfast earlier in the hotel before we checked out. 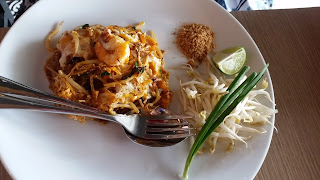 Hubby couldn't have enough of Pad thai so he ordered one for himself. He said it was alright with him. 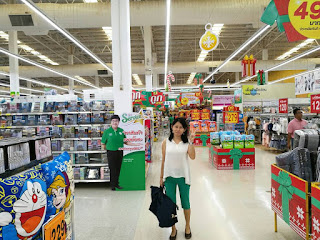 After filling up our tummies, we continued our trip to Tesco Lotus to buy groceries and food. Loved what we could find here. So convenient. And prices were reasonable too. Cheaper than what we have here.

You can see how much we bought in my previous post. 3 full carts! Equavalent to RM1000 worth!

After spending slightly over an hour here, we went to the jetty to catch our 2pm boat ride.

Oh? Got friends there? I prefer going to places with friends or family who can take me around the best places in town, not go around blindly. Many do that, go to the wrong places and say the food there is no good.

Shopping and eating is the top of the list when it comes to traveling! :)

fresh seafood is my favourite!

Is that you in the last photo? You look good in white blouse and green pants.

When I travel, I do not do a lot of shopping as I am not a shopping person. I am more of a sight-seeing person. I love to look at things and take pictures.

Yup. That was me. Thanks.

I didn’t really got the time to shop and enjoyed local food, except some tom yam and phat Thai at a food court. Will do so next time when I am back ! Phuket really makes us in holiday mood when reached there!

Aiyo..so shioklah, Rose! Wish I could join you. What a fun trip xx

Sight seeing is top for me when comes to travel...

So nice to have local friends to take you for dinner. They will know what and where is the best food. Food and sightseeing when traveling.

Really good to have the local insight to where good food is.

You are luring me to visit Phuket again. I rented a bike and carried my wife in the rain around the island. It was so fun and memorable.

I love to eat Pad Thai too and you can find good ones at the Black Canyon in KL. They are franchise from Black Canyon's Thailand too.