It was 22nd July, our Sarawak Day that Friday. A drizzle morning but hubby and I woke up early and headed out before 7am.
We went to this coffee shop for breakfast. A cold morning called for a warm and nice mixed pork soup, don't you agree??

So both of us went for the mixed pork soup and vinegar noodle (RM9). So comforting to have. Not many people around so our order came pretty fast and we didn't need to wait so long to satisfy our hungry tummies.

Before we left, we checked out the kuih stall. Ended up with 2 you tiaw and a pack of Chinese yam cake for RM6.80. Something for us to munch when we went hungry before lunch time.

On another note, it was the day hubby came out from his home quarantine and isolation after contracted Covid-19. The previous week, he attended company dinner and meeting and few of his colleagues tested positive a day later. So, my man also did a home test and discovered he was positive. So, stayed at home for 6 days before re-tested on 22 July (7th day). He actually tested the night prior and it came negative. And this time, it also came negative. So after been stuck at home and away from work for more than a week, he was safe to drive back to Sri Aman to work on 25th.
Posted by Rose world at 10:56 AM 5 comments:

After our first visit to this new food court earlier this month, we went there again a week later.

We were pretty early, we were there before 7am but there were few occupied tables.
A 24-hours food court but not all opened in the morning. Hubby went on the round while I seated on a table. He took the liberty to order our breakfast and his pick was from the dim sum stall.

RM26.50 for the 4 baskets of dim sum. Over all the dim sum was pretty nice. At least we found a good dim sum stall not far from our place now. We had har kaw, pork dumpling and chive dumplings plus the lo mai kai.

I liked the har kaw and siu mai more while hubby preferred the chive dumplings and lo mai kai.

Of course we could not finished the glutinous rice so we brought home for consumption later.

Lotus wrapped glutinous rice
Worry that both of us will go hungry faster before I cook lunch, hubby tapaoed 2 packs of pork porridge from the porridge stall. RM9 per pack. True enough, I was hungry by 10am, so helped myself to a small bowl of it.

We were back to Xin Xin Wang for our Saturday breakfast.  Nothing unusual for hubby and Jan as both ordered their favourite sandwich and breakfast set. I, being the adventurous one, will go for different dish whenever I drop by here.

That morning, I went for the tomato crispy mee RM6 for my breakfast. Yes, tasted as good as ever. Portion was just nice, although can see it has shrunk slightly with lesser ingredients but nevertheless, it remained one of my favourite tomato crispy mee in Kuching.

Just when the kids and I were recovering from flu, fever and cough bouts, it was hubby's turn to get the virus. He went to see doctor while he was in Sri Aman. Slept most of the weekend away when he was at home and then he was craving for a nice porridge on Saturday afternoon. Fish porridge was his craving so he went to browse through Grab app to find his option.

Somehow he ended up ordering minced meat with century egg congee  (RM20) from Chok Kar Chong. Medium portion that fits for 2 - 3 persons and plus RM2 delivery fee, it was RM22.

Arrived around 30 minutes later and the congee was still warm and nice to take. Hubby took some before took his nap. I also took a small bowl of it and yes, it was nice and comforting.
Posted by Rose world at 10:23 AM 10 comments:

Hubby bought 10 of this aphrodisiac molluscs not long ago. RM6.50 each and if buy more in bulk, it will be RM3 each. Hubby bought through a friend who owns a cafe.

So last Saturday, I took them out from the freezer and defrost before enjoyed them in the afternoon.

Hubby did all the peeling. He drizzled some lemon juice and Tabasco sauce to his oysters while I prefer to take it just like that. The oysters still have the sea taste; very fresh and salty! No seasoning needed!

This aphrodisiac is rich in vitamin, mineral and zinc. Do you like oysters?? Do you take it directly from its shell or prefer to cook it?

But not all, same stall the same (for now). RM4 per bowl. Like the kolo mee stall in this coffee shop when we went last Friday.

Even the drink prices remain the same, as far as we know. RM2 for this big glass of teh o. Even a glass of tea o peng also cost RM2. Cold or hot, their tea only cost RM2 per glass.

Little further down the road, there was new development by Lee Onn. Pines Square, facing the MJC big roundabout.

Some blocks were completed and few shops have moved in and started doing business sometimes this year.

One of them was this Premier Food Republic. And since I was getting better and almost bored of staying at home, hubby suggested to make a visit to this new food court on Monday. Jan also joined us for breakfast since she was an early bird.

It wasn't 8am yet but the place was pretty occupied.

Many choices of cuisine and type, from Asian to Chinese, Thai, and Western, fusion etc. Not all were opened in the morning but yet, there were more than enough to spoil your palate.

My choice of breakfast was this claypot seafood yee mee!! It has been quite a while since I had one.  This one was alright. Not too much MSG, soup was rather bland. RM10 for my breakfast.

Hubby went to order this Yong tofu, something he missed having when he studied and worked in KL. Compared to the one he had at roadside stalls, this one cannot beat them. The sauce not so great and fried stuff not that fresh, according to him.

Jan had the pancake set from the Breakfast Factory stall. Hubby also ordered another breakfast set from same stall. Total RM14 for both. 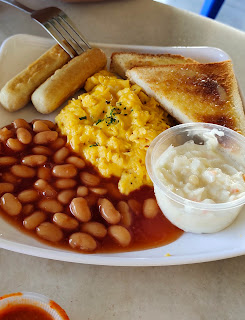 Yes, pretty delightful breakfast amid the hot morning. We left slightly after 830am.
Posted by Rose world at 8:46 AM 6 comments:

Our recovering food last Saturday. Hubby did all the buying while me and kids stayed at home. The virus also got onto Jamie as he has fever and loss  of appetite when he woke up on Saturday. Spent most of the day sleeping in his room.

Porridge when one is under the weather. We always stopped by to buy the pork porridge from this food court.
So we were having pork porridge for dinner with side dishes of chai poh omelette.

And hubby enjoyed his share of century egg. Sorry, I could never digest that (yet!).

Then he stopped by few places, one to get coconut juice. Found a place selling RM3 per cup for coconut juice while most now selling at RM5. And this place was pretty generous with the coconut flesh as well!

And the nice char siew bao and bak bao at the stall next to H&L MJC. Now the baos  are priced at RM2.10 each. And no more egg in the char siew bao!! Oh well, one can't complained much nowadays.
And this isn't part of the plan but hubby thought of treating kids to a nice pan of pepperoni pizza. Of course Jan and Jay could not resist it. When I was ready to take photo of the pizza, it only left this slice in the pizza box. Lol.

One of those day when I am craving for McD's. Actually has been super busy this week as Jan and Jay were down with sickness since last weekend. Everyday they did Covid test but result came out negative. 5 classmates of Jan were confirmed positive earlier this week.

So this week, both Jan and Jay stayed at home, resting. Mask up when they were in living room. Jamie and I also wear our masks. And when they were much better by middle of the week, it is my turn to fall sick. Sore throat and feverish on Wednesday.

Hubby came back from KK on Tuesday night. Flight delayed and only after 12 midnight, he reached home. So he slept in late the following day. After dropped Jamie to school, I went to McD's drive through to order breakfast for the 3 of us. Double cheese mcmuffin with egg (around RM10 each) for Jay and hubby.

I also ordered 2 small size chicken porridge for RM6 each. One for me and one for Jay.
True enough, hubby was up around 10am and took his breakfast before get ready to drive to Sri Aman to work. Kind of missing him when I am not well. No extra help, no comfort from him.
Posted by Rose world at 7:40 AM 5 comments:

With price hike starting this month, I am expecting even lesser dine out.  Have been cooking as much as possible since MCO, so not much change in my routine but definitely could feel the pinch in my wallet!!

Food I had last month, for memory.

Once a while I don't mind a plate of roti telur with teh tarik, one of Malaysian favourites.

Our first time trying out the kolo mee in Ah Nyet Cafe in MJC. Pretty old school I have to say.

Not all the time I will have kolo mee. I much prefer kolo mee hoon actually. 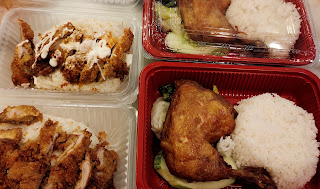 Fried chicken rice for the boys while me and Jan went for Ayam penyet rice. Last month it was RM14!!! Wonder how much it cost this month.