In the afternoon, we met up with my half sister and her hubby in Suria KLCC after the Twin Towers tour and a little shopping in Decathlon outlet. We spent a good time catching up over lunch and a little KL tour.

We hopped into LRT to Pasar Seni from KLCC. A walk at the old part of KL brought back memories of my college days when I used to ride KTM to KL from Nilai on weekends. Those were the days. So much fun and adventures.

The kids were enjoying the train ride irregardless of the peak hour and crowds. From Pasar Seni station, we walked to this place, recommended by my sis. A few minutes walk away.

Kafei Dian, literally translated as "coffee shop". She insisted on having lunch here, and I understand why. Nice ambiance, variety of food and big portion. The building was a century old post office, before turning into an eatery while maintaining most of the structure and fixture.

We actually had lunch in Suria KLCC early so I wasn't that hungry but I did ordered this lovely Hainan style chicken chop. The sweet and sour tomato sauce complement the crispy chicken chop well.

Jamie wanted rice so I ordered this sweet and sour chicken rice for him. The fried egg gone to Jan since Jamie can't take egg.

My noodle boy, Jay requested for fried mee hoon, which was good with many ingredients. He cleaned up  his plate!!

Jan had the cheese and egg croissant, which she enjoyed.

Kafei Dian is famous for its coffee but unfortunately none of us are coffee drinkers.  Just as we finished our lunch, it started to drizzle outside. Luckily we came prepared with wind breakers, caps and umbrellas, so it didn't dampen us from exploring the nearby street. Coming up in my next post.

And I would like to wish everyone a "Happy New Year". May 2023 brings joy, peace, health and great blessing to everyone. See you all in 2023!!

It was Christmas Day!! We woke up late and cannot make it to church. So we went to Premier Food Republic for breakfast. My man likes its Western breakfast and never got bored of it.  We were having that for Christmas Day breakfast.

After the boys took their breakfast and shower at home, we went for our movie outing. I pre-booked the tickets in GSC in The Spring Mall the day earlier. Avatar 2, it was really a long movie, over 3 hours. And now everyone is waiting for sequel.  Wonder how long would Avatar 3 takes?? Lol!!

Thanks to snacks, we were not that hungry by the time the movie ended at 3pm. I bought Sugarbun's chicken burgers and fries while hubby bought few packs of pop corns, a pack of nuggets+sausages as well. No cooking for me on Christmas Day, so we bought roasted chicken rice from Yummy Xpress before headed home.

On Boxing Day, only me and hubby woke up early. Thanks to FB, we discovered a new breakfast place in our neighbourhood. Small Cat Cafe!!

It was after 7am but not many customers around.  We passed by and saw this coffee shop few times but never checked it out in the past.  If not because of someone posted on this uncle's Hong Kong styled chee cheong fun, we would not be going to this shop. Small Cat Cafe is next to Fu Rong Pan Mee shop in MJC.

Besides chee cheong fun, this friendly uncle also selling some steamed dim sum and kueh. Hubby quite liked what he saw so he ordered a bit of this and that.

RM7
And we also tasted the lo mai kai and some siu mai and fried ngoh hiang.  The lo mai kai was alright, not too flavourful but just nice. Siu mai (pork dumpling) and ngoh hiang (spring roll) was good! We both liked and enjoyed them very much that morning.  The filling was tasty.

Hubby had most of the ccf while I could not resist not ordering Sarawak laksa.  RM7 for small bowl of my laksa.  Taste was alright but a bit oily. I didn't take much of the broth.

You bet we will be back for more in the near future. They have fried taugeh kway teow stall (which I plan to try when come back) and Kampua stall besides the kolo mee and Sarawak laksa stall.  A new breakfast place for us (I mean, my man!). ^^
Posted by Rose world at 12:49 PM 7 comments:

On 9th December, we walked to KLCC using the pedestrian walk. I pre-booked and paid RM126 for our Petronas Twin Towers skybridge tour few months ago. So our main itinerary for the day was Twin Towers and meet up with my half sister afterward.

It was not a very far walk from our apartment suites. And the pedestrian walk was covered and air-conditioned so we had a nice walk to  Suria KLCC.

From the mall, we asked around and found the right entrance to the Petronas Twin Towers.

Our slot was 11:15am. Many tourists that Friday, both local and foreigners alike. We were given stickers and grouped into batches. Once it was our turn to go up the towers, we had a staff to guide and follow us. We made the first stop at the skybridge, which was on the 41st floor.

It was so cold at the skybridge. Maybe because of the rain the night before, so it was chilling on the skybridge. We could feel the breeze. Luckily we stand by our jackets so who felt the chill, could put on their jackets.

After few minutes of photo taking and admiring the view of the city from the skybridge, we were ushered to the 86th floor. We need to take one lift to 83rd floor then another lift to 86th floor where you could see the pinnacle of the tower.

One of the twin. The view of the tower and looking down at the city was hard to describe experience. Once in a lifetime memory for us, you bet. And from the photo above, you could see the other 2 tall towers. On the right is the KL Tower and in the left is the newest tower, due to open next year. Merdeka 118 Tower.

We spent longer time on this floor before been called by the guide as there was time limit for each batch.

We descended the tower and came to the gift shop. Other than the photoshoot (RM65!), we didn't buy anything from the gift shop. For us, the pictures and memories we created worth more.

And since tomorrow is Christmas Day , I would like to wish everyone "A Merry Christmas!" And hope you enjoy my Christmas photo compilation.

We moved nearer to city centre on our 2nd day in KL.

We booked Soho Suites KLCC the day earlier and luckily this time, our accommodation went smoothly without any hiccup. A lot of communication between the owner (agent) and us but thanks to the kind owner, we were able to checked in around 2pm instead of 3pm that afternoon with no extra charges.  It was a lovely family suite with 3 bedrooms but we only paid and used 2 rooms for the remaining days in KL. Kitchen, fridge, washing machine and dryer were available to our liking. The kids used the master bedroom as bigger bed while hubby and I took the room with queen sized bed.

A city view from our our windows; we could see the KL Tower on left side and KLCC on the right.  It was a very strategic location as we could walk around on foot.  And we enjoyed the Pedestrian Walk that we discovered that evening.  We used the pedestrian walk few times, to Pavillion and KLCC. 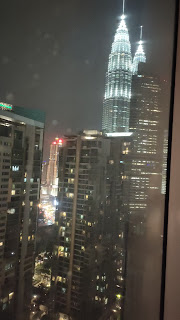 As it was raining in the evening after we checked into the suite, we decided to take a Grab car to our dinner venue.  We could walk for about 20-30 minutes to Alor Street, but due to rain, we took a car.

As we reached Alor Street around 4pm, not many activities happening there. We managed to find a shop that opened, so we settled down for an early dinner.

We were rather hungry by then as we took early lunch in Wangsa Maju that day.  Not many customers in Alor as the rain was still pouring.

We had this 3 eggs steamed egg.  It was alright but I didn't quite like it because of the century egg.

Stir fried kailan with beef was good.  I enjoyed the tender beef slices.

My special request each time I am in Alor Street.  Lala!!  Kam heong lala was our choice that evening, and it was flavourful and tasty.

Mixed vegetables in yam basket was equally good, as everyone enjoyed the basket very much.

Lastly, we ordered this claypot ginger chicken which was very comforting to have on a cold day.

It was an enjoyable and delightful dinner amidst the rain and cold. Plus drink, our dinner costs RM181.30. After the dinner, everyone was ready to take a walk to Bintang Walk and check out on the shopping malls.  That is coming up in my next post.