1-month long school holiday has come to an end. Time really flies when we have a good and relaxing time.

We didn't go out much over the school holiday. No flying anywhere or go some place far. However we didn't want the kids to feel bored over the long holiday so we did planned some day outing over the weekends like this, Gawai visiting and Kampung visit.

And then, we had company at our humble home during the Hari Raya weekend. Hubby's male friend came over for a short 2 nights visit with his girlfriend.

They flew in from KL on the first day of Hari Raya. It was nice meeting and catching up with them again since our Phuket holiday 6 months ago.

Once they landed at the airport, we drove them to Pyramid Dream Food Court for Bishopgate mixed pork soup and vinegar noodle. They loved the sour vinegar taste in the noodle and singing praise of the clear mixed pork soup.

We left at 12 noon and started our journey to Borneo Highlands.  This was our 3rd time driving along Padawan road this month. First was on Gawai day and second  was a week later. 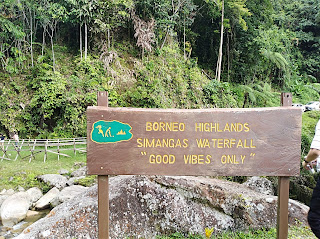 Our first stop was the good vibe waterfall. We didn't stay long or go into the water as rain started to drop. 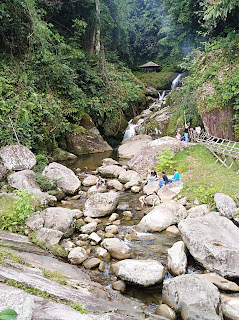 We continued our drive to the highlands resort. 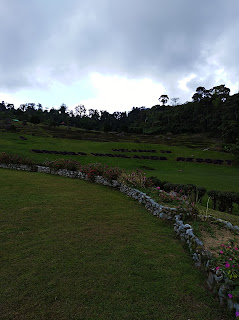 Unlike our first visit to the resort few years back, we wouldn't be able to drive freely around. Now they have assigned drivers to bring and guide you around. There is a fee charge for that on top of the entrance fee. Fortunately we bumped into a friend who is currently doing a construction work there and he was so kind to bring us around the resort. 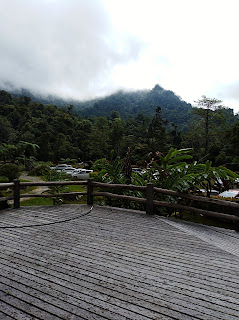 Our first stop was the Kalimantan view point. 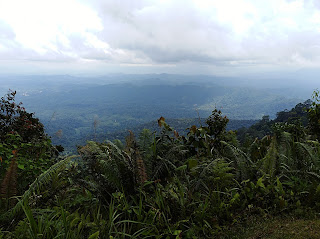 The white marking of the border between Sarawak and West Kalimantan. No reception there but handphones could detect our neighbouring country's Telco and roaming. 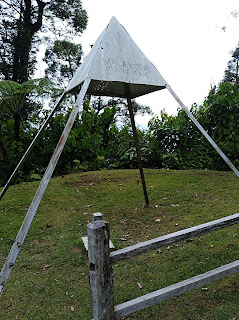 This was the only place where you wouldn't need a passport to cross the border! One second I was in Malaysia and next second I was on Indonesia soil! 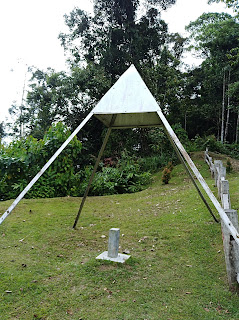 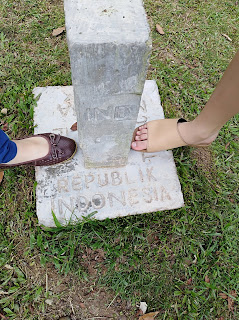 The view on Borneo Highlands was as spectacular as before especially after the rain. 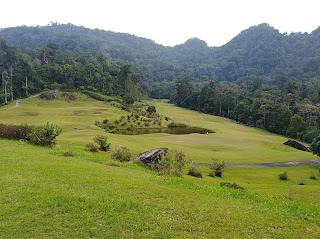 After thanking our dear friend for the tour, we departed back to Kuching centre where we brought our friends to visit the prominent cat statues. 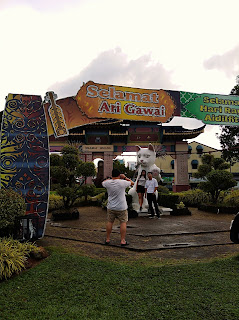 The white cat in Padungan and the cat family in golden triangle. 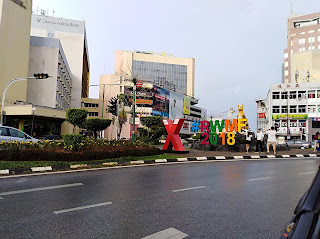 After that, we went for an early dinner since everyone was famished by then. It was around 5.30pm when we reached our dinner venue. More to come in my next post.
Posted by Rose world at 12:37 PM

Wahhhhh!!! If I go Kuching, you take me to all the nice places or not? :D

You all are good hosts.

Omigosh, the scenery is so beautiful up there at the border. Would love to come here one day! And I totally love the good vibes waterfall. That is such a cool name. Haha.

You guys sure know how to take people around, Rose. What an amazing time with friends and family - the fond memories!

The place is really nice and SO GREEN!

Time really does fly when you really don't want it to -such as on holidays.

Yeah time flies so fast...especially vacations!
But I can see you had a great time in those
lovely places.

When visitors come visiting, it is like sightseeing for us locals as well, right? LOL.. I also feel like I am like a tourist too when others come visiting to my hometown...

That's an interesting place, & it looks so serene, dear! xoxo

What a nice outing to Indonesia hee..hee...

I was once at the Border (Golden Triangle where Thailand, Laos and Myanmar meet) too, quite a mixed and unique feeling to be at the Border

Must bookmark this place, bring me there when I go Kuching ya...

So far and the road is very long winded and narrow. Don't dare to drive those hill and kampung road. Haha.

It's very fortunate of your friends to have you n your family as tour guides :)