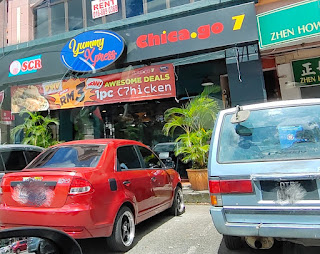 SCR (Singapore Chicken Rice) and Chica.go7 (2 local brands) have consolidated into one outlet now. The nearby outlet was few minutes away but since it has renovating and changing name, I have not visited the new shop.

You can have both cuisines under one roof now; the Asian and Western dishes for everyone. A modern concept that appeal to the younger generation.

It was last Sunday when Jan and I visited this newly renovated shop. As it was early and no customers around, we only need to wait for a short while for our takeaway order to be ready. After 20% discount, it was slightly over RM40.

One chicken cheese burger for Jay, fish, chicken and fries set for Jan, while Jamie and I were having roasted chicken rice.

And we also shared their curly fries as well. I didn't take photo of the burger.

Another visit this month as I have 2 more vouchers to be used up before 31 December. Valid for dine in and takeaway, and for order less than RM100.
Posted by Rose world at 1:12 PM 4 comments:

Time of the year (again)

It is time to check out the Christmas decoration in this well known shopping mall in Kuching.

Last Sunday, I brought the kids to the mall before went to my parents' house for a visit. I prefer the opening hours to avoid crowds so we reached the mall slightly after 10am. We spent less than 30 minutes walking, admiring and taking photos of ourselves and the Christmas decoration before proceed to my parents' house. Hubby flew to KL the day earlier so he will be enjoying the Christmas magic at the mall there!! Lol.

A lovely pagoda-like setting with rotating snowman, Santa etc in it.

The big tree outside. As it was hot, we didn't take much shot outdoor.

Crowds started to come in as we were leaving. As we stayed briefly, no parking fee was charged.

It was the election day (19 November). Hubby and I was up very early. Before 5am!! And one neighbour bought a rooster not long ago and that rooster has been crowing since his arrival to the neighbourhood. Somehow the rooster crowed anytime of the day, even during the wee hour at night.
Anyway, I don't need the rooster to wake me up. My man will do. Once he was awake and couldn't sleep, I knew because I was a light sleeper. He would make sounds and that would wake me up.
Supposed to go for a morning walk that morning but somehow my man wanted to go to wet market. Initially Kenyalang but we decided to go to 3rd Mile wet market instead. Nearer.
So, it was slightly after 5am when we reached the 3rd Mile. But there was buzz around the market and surrounding shops. Not big crowd but there was early birds buying vegetables and stuff like us.
After done with our shopping, we walked to a shop that near the market, named Mei Hao Cafe. Almost full house, with mostly elderlies. One table with elderly men were talking about buying numbers. Guess they were trying their luck on winning some lotteries on election day!! Lol. We were able to get a table and our order came pretty swiftly after we ordered our drink.

kolo mee RM4
The kolo mee with char siew oil was only RM4!! Big portion as well and I was having hard to digest such big breakfast early in the morning. Our drink (1 big glass and 1 small glass of teh o) was RM3. Now that was cheap!!
The kolo mee was nice, we both agreed. We sure enjoyed our breakfast that morning. After we were done, we walked back to the same route but stopped at the corner shop to get something. Be patient, I will come to that.
We also made a stop by the wet market and get these curry puff (RM3) and lemang (RM5) from a Malay aunt before went to our car and drove home.

Curry puff and lemang
Ok, this was what we bought from the corner shop!! A roast stall right in front of that coffee shop and we stopped the pork trotter looked good. It was like fried trotter but it was more of braised pork trotter. Something like hong sau rou (red braised meat).

Pork trotter RM50
And it came with generous pack of gravy!! I didn't pour the gravy onto the trotter as worry the kids wouldn't like it. So, whoever wanted the gravy, can just spooned it into the meat. We enjoyed it for our lunch and dinner that day.

It was a Sunday but I didn't feel that well. Cough and sore throat, I was thinking of having something warm when we went to this food court for breakfast. So after walking around and found a pork and fish soup stall, I decided to have fish noodle soup. Vermicelli was my option.

RM10 per bowl
Somehow I was craving for fish tang hoon soup but they didn't have tang hoon as noodle option, so mihun is my only option. All fish in my soup bowl from fish cake, fish ball to fresh fillet. I was quite happy with my breakfast choice.
And as afternoon came by, my hubby wanted to prepare something different for lunch. Fish n chip!! So we bought dory fillet from Choice Daily (around RM12 for 2 fillets), and got ready our lunch.

We made the batter and tartar sauce from scratch. Hubby did most of the work while I helped in frying. We cut the fillet into small pieces so easier for everyone to eat. And I did the potato wedges.

Although my throat was not 100% well, I also got a taste of it. My hubby prepared a plate for me. His version of Fish N Chips. I much prefer potato wedges than French fries. How about you??

The kids were super happy and enjoyed their fish n chip that afternoon.
Posted by Rose world at 2:06 PM 6 comments:

I went to Xing Xing Wang to buy lunch while waiting for Jay who had tuition at the nearby shop.
Initially I wanted to buy lo bak rice (braised meat rice) and mixed curry rice from one of the stalls but it was closed that particular Friday. So, I ended up buying lunch at a different stall.

Chicken rice stall, managed by a Dayak lady. Tried her food before; not that good but decent enough. The chicken was crispy but lack of flavours. I guess she didn't seasoned it well or longer. Anyway, left with no alternative, I bought 1 pack of Ayam penyet rice (above) and 1 pack of fried chicken rice (below) from her.
I let the kids choose what they wanted to have so Jan opted for ayam penyet rice while Jamie took the chicken rice. The former was RM9 while the latter was RM6.

I also bought tapau from the fried stall, which was fried kway teow and fried rice (total RM11.50).

Jay chose the fried kway teow and I was left with the fried rice. I didn't mind as it has been a while I tasted its fried rice, which I enjoyed in the past. The fried rice used to be more colourful and tastier, with more ingredients such as char siew. With everything increases in price, I guess I can't complained much. The portion still as big as before, and I was having hard time finishing it.

Today is the day! GE15 voting day!! I, for the first time went to vote very early!! Usually I prefer mid-morning or near to noon to do so but today, my man was eager to send me to polling station. Luckily no need to wait for long, I got my voting done!! Surprise that it was rather quiet at the polling station. However, I bumped into my little brother there, of all people. He queued right in front of me!! He also gone out early to cast his vote. If you haven't vote yet, you still have time to do so. To the future of Malaysia!!!

It was the first Sunday of the month. A very wet day to start with. Rained since the night before and continued till the next morning. Due to the rain, hubby and I woke up late that morning for a breakfast appointment.

A family friend of my parents (also the father of my godbrothers) had suggested to my hubby the day before to meet up for breakfast in Kenyalang hawker market. That sounded good as it has been ages since we gone to Kenyalang for its market and breakfast.

The breakfast was fixed at 6am but both of us only woke up that time that day. Blame us for not setting alarm for that!! Hubby usually wake up earlier but somehow he overslept. The weather was too nice to sleep in. Lol. Anyway, we still rushed to Kenyalang which took us about 20 minutes drive or more as it rained. As it was Sunday, we parked out car a bit further and we walked over to the market to avoid congestion near the market area. Uncle and my parents has left by the time we walked over so we missed them by a nick of time. Anyway, since we were there, we bought some vegetables in a mart. We didn't go to the hawker market since uncle and my parents have gone home. 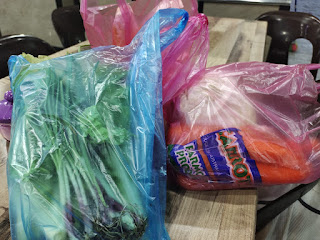 After done with the shopping, I suggested to hubby to have Sarawak laksa at this coffee shop where my mum and I used to patronise. Both of us enjoyed its Sarawak laksa back then. So, hubby and I had a small bowl of that for RM7 on a cold, raining Sunday morning.

Good Day food court was the name of the eatery. Just behind Everwin Supermarket building. Hubby commented the broth was nice and lots of ingredients for a small portion.

Before we left, hubby went to the kueh stall in the food court to check out on what they have. He ended up with these kueh and 2 packs of nasi lemak. As for the kids, we bought 3 packs of kolo mee (stall next to the Sarawak laksa stall) for them. No photo taken.

Hubby has a niece from Sibu studied for her accounting diploma in a local college in Demak Laut. Due to MCO, she only back to Kuching to continue her study few months ago. Last Saturday, we went to find her for lunch. 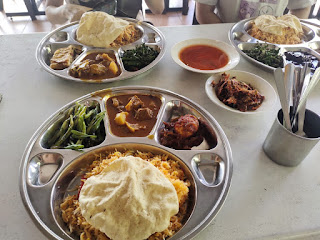 Since we were in Demak Laut, we decided to have lunch there instead of driving to city. We chose Indian food for our lunch. The niece liked the dishes in Curry House, so we had our briyani lunch in Curry House Demak Laut shop.

Hubby and niece chose the dishes while I just wait for the food. Acar and fried spiced bitter gourd were served first.

My briyani rice set chosen by the man. Lamb curry, stir fried paku and fried omelette. Of course, not forgetting the papadom. 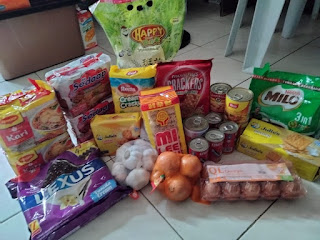 After lunch, we dropped her off at the hostel which was not far from Curry House. Before sending her off, I helped her out by carrying the food ration we bought for her to her hostel room.
Posted by Rose world at 12:52 PM 6 comments: