New kid on the block

I hope I would be able to blog more this year. Expecting a busy year, chauffeuring my kids around as they would be in 3 different schools, with Jan in afternoon session.

If for the past few weeks I had not been blog-hopping and visiting your blogs, I apologize over here. Had been busy and didn't have time to visit and leave comments over the holidays. But I bet I would be able to make time again now that the kids are back to schools.

I have told you before that a Sibu-owned supermarket, Everwin opened for business  in Kuching last year. It has been many months now. And they also have shops just a few stone throw away from 38 Food Street, Batu Kawa.

Some said it is a steamboat shop but not so long ago, Everwin opens a food court at that vacant lot. Look like they are venturing into eatery other than supermarket in Kuching. 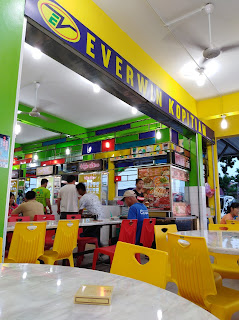 The new kid on the block, Everwin Kopitiam. Very bright and colourful, just like its logo. 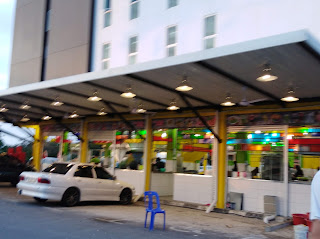 One morning last week my man woke me up early. Before 6am. He is getting older, hardly sleep long. So after sometime, we decided to venture out for breakfast. The kids were sleeping and we didn't want to wake them up that early since it was sti'll their school holiday.  So both of us went to check this new food court out. 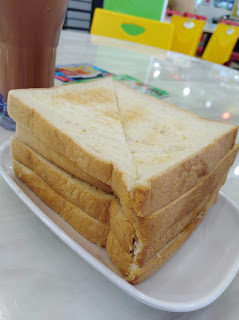 It was too early for me, so I ordered something light for my tummy. Roti kahwin. RM5 for 2 thick slices of lightly toasted bread. I actually prefer thinner roti kahwin but this would do. 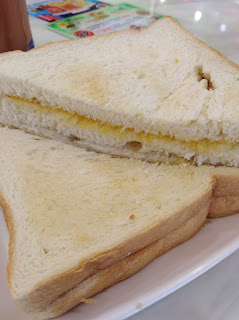 My man smell the nice fragrance of fried kway teow from the Penang fried stall when he walked around the food court and decided to have that for his breakfast! 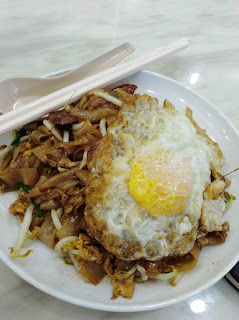 Lovely plate of fried kway teow with an egg on top for RM7. Nice Chinese sausage, fresh cockles and bean sprouts to accompany the well-fried noodle. My man enjoyed it very much. 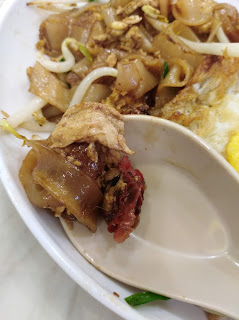 As for the kids, we bought kolo mee for their breakfast.

Another day, we will bring them here. A new decent food court in MJC.
Posted by Rose world at 9:32 AM

Oh? We have Everwins here but no food court, just their supermarket. They had a branch at Selangau even - I think the smaller businesses have all been affected in the face of the stiff competition.

Something new always peaks my interest.

Good that it is a decent food court!

The char koay teow was really worth it!

Worth trying new outlets and check out the food...

I am always game to try out new place. Nice CKT!

The CKT looks good! It is good to have a new place/outlet for food, more choices now.

All the best to a busy school year, mommy Rose! Hehe

Me also game to try out new places...

My aunt likes to joke that she didn't only become a mum but a near full-time chauffeur when she had kids.

looks like a great comfort food to have as breakfast

So sweet and lovely to see you both sneaking out for early breakfast without waking the kids up. I love to eat Roti Kahwin too and the best I had was in Kota Bahru in Kelantan!

Happy New Year dear! Looks like it's going to be an even busier year this year for you & the family. 🤭