Two mornings later, my man was early so we went for an early breakfast after send the boys to school.

He commented he still prefer the kolo mee from this coffee shop than here, so I obliged to his request and we were back to his current favourite place.

I decided to try something new on the menu that I had not try before. Seafoof noodle!! I requested for mee hoon instead of noodle. 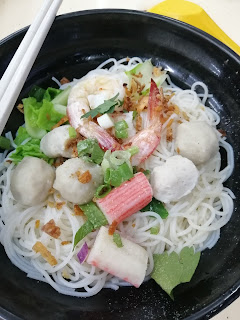 My seafood mee hoon, the dry version. Hubby had his usual noodle and soup set, so I did not want soup version for my mee hoon. 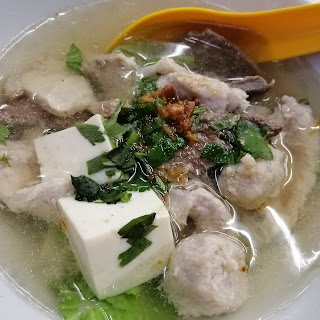 It was a cold morning that day as it rained the night before. So a warm fresh soya milk for me. No sugar added, so you need to add your sugar yourself as each table is provided with a small container of white sugar. 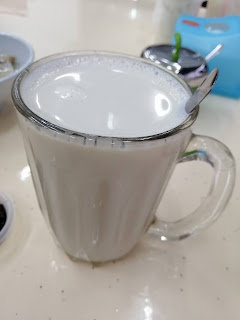 
I also brought some sio bee (siew mai) home as my boys love them. The sio bee was nice as the skin wasn't that thick, which I liked most. 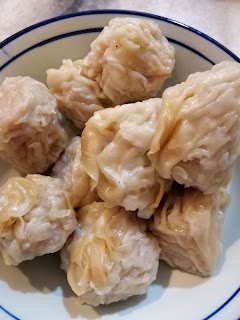 
We headed home just before the rain started to pour. It was a very cloudy day that Thursday.
Posted by Rose world at 8:38 AM

Not a fan of those imitation crab sticks. Sio bee looks good!

I don't like crab stick and will request not to include in my noodle. The soup with noodle looks good.

I like sio bee and soupy noodles, such a comfort food during rainy days!

Oh dear, I see crabstick in your noodle. Not my favorite :( I would prefer the pork noodles hee..hee..

I prefer mee hoon too. Love the tofu in the pork soup.

I want the sio bee. They serve tofu in my fish soup too which i like it so much. Contrary to the majority, i don't mind crab stick though.

It is so difficult to find fresh and warm soya milk in KL. It is such a healthy drink.