It was one of the weekdays when I brought my mum for our usual weekly breakfast and marketing.

We decided to go to Siang-Siang Corner in Tabuan Jaya for breakfast. Been there twice before with my mum. I like the place as it was refurbished few years ago and the place looked cleaner and tidier. More food stalls to scout around as well. 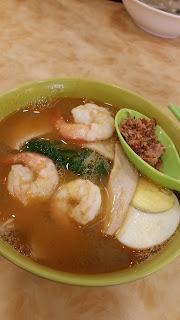 
I went for the normal bowl of har mee, not the special portion of RM8. I opted for the big yellow noodle which I personally think goes well with the sweet prawn broth.

3 big, fresh prawns as well as few thick slices of lean pork in addition to a half portion of hard-boiled egg. And did I enjoy it? I have to admit that I did liked what I had that morning. Probably the best har mee in Kuching I ever had! 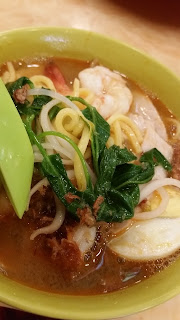 If my throat was better, I would have tried the dipping sauce but I decided not to. The sauce was left untouched. 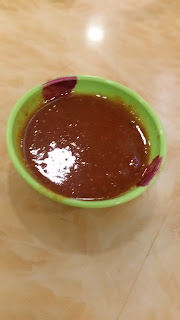 Imagine, I had that in 2009 and it is still around so that clearly shows how nice it is and how well it has been doing over the years...and it's very authentic too! My friend said the guy's from Penang:
https://suituapui.wordpress.com/2009/04/22/until-its-time-for-me-to-go/

I like to eat har mien too. Just love the taste of the fresh prawns.

I also having cough, took me two weeks to recover

For me, it is no chicken/no egg/no chilli and no cold water during my sickness

Hope your cough and sore throat will recover soon

I like har mee and must have it with their special sambal.

So long I havent had any prawn noodle, not easy to find a good one in Kuching, I prefer mine with meehun.

I usually go for a combi of mee/mihoon when it comes to Har Mee. This looks delicious, Rose. I hope your cough goes away soon... boy, is it sticking around!

Yeah, my har mee or hokkien mee I like to mix beehoon and mee.

I am an American man, and I have decided to boycott American women. In a nutshell, American women are the most likely to cheat on you, to divorce you, to get fat, to steal half of your money in the divorce courts, don't know how to cook or clean, don't want to have children, etc. Therefore, what intelligent man would want to get involved with American women?

American women are generally immature, selfish, extremely arrogant and self-centered, mentally unstable, irresponsible, and highly unchaste. The behavior of most American women is utterly disgusting, to say the least.

I love har mee or prawn noodle. I usually have the yellow noodles and oh, I must have the sambal dipping. Yums!

Oh wow. I love Prawn Noodles. I don't remember any good ones here in PJ though.