It is rainy season in Sibu, I think!  Because it has been raining almost every days (or nights).  In my housing area, I could see the water flooded and over-flowed in the drains and some even flow to the roads, causing some floods in certain roads.  Luckily I am driving 4W so it would not cause much problem to commute around.

Yesterday morning, we woke up late.  I don't usually cook breakfast on Sunday so we decided to go to Farley Food Court for Dim Sum.  And it was a gloomy day in the morning and feeling blue, I was craving for porridge.  Hubby ordered pork porridge with century egg.  It was a big bowl (RM5.00) so I shared some with him.  Great for a cold soul! I enjoyed it with some assortment of Dim Sum and they lasted me till late afternoon. 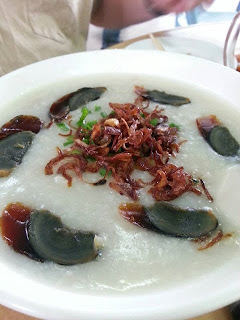 ﻿
As for this morning, it rained pretty heavy when we were about to send Jay to his kindergarden around 8.00am.  Now the rain has stopped but it would be another gloomy morning.  I had a banana, a glass of warm Milo and half plate of instant Mee Sedap (that my girl cannot finish for her breakfast).  Should last me till this afternoon.  *wink*
Posted by Rose world at 9:08 AM

Century egg porridge is my fav.

Over here raining in evening.

U eat so little ah?

Flooding? Which area? I've yet to see any place that's flooded...but yes, it's been raining a lot...and quite heavily too...very often lately. Good for my rambutans - the fruits are growing pretty well - can't for them to mature fully and ripen!

Btw, isn't porridge cooling? Have to go for kacang ma and stuff with a lot of ginger to keep warm.

I am also feeling a bit chilly now. My suspicion is the body is depleted of nutrition after my marathon. Now busy eating every 2 hours...and yes had a similar porridge last night:D

It's been raining in Kuching too. Almost daily.

Been raining where I am too. Keeping warm with a hot cup of milo.