There were many small coffee shops in our area, that we hardly gone to. Usually we went to few coffee shops that we liked.

But on a Sunday we decided to try out a new coffee shop that we have not visited. Tian Gia Cafe, opposite from Cosway MJC. It has been there for few years but we never stepped our feet in it till few Sundays ago. 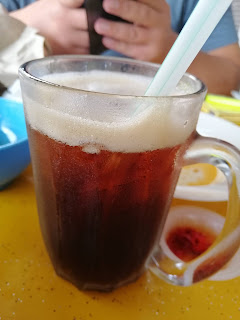 Their teh o peng only RM1.50 per glass.  Very nice with the foam on top.

There were few stalls, such as kolo mee, nee jawa/ayam penyet stall, chicken rice, toast, and Malay kuih stall to name a few. That day, only the Malay stall and kolo mee stall opened. Others not open so early. On my first visit,  I went for kolo lau shu fen as I spotted the photo on the kolo mee stall. 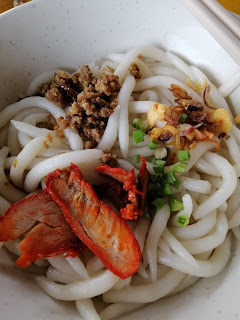 Hubby had nasi lemak (RM2) from the Malay kuih stall (sorry, I did not take photo of it). Hubby asked for extra egg and sambal, the Malay lady was so kind not to charge us. However hubby gave her RM1 for the extra which the latter eventually accepted after a while. And in return, she came back with a extra bowl of nasi lemak, treat from her!! Wow!! She said it was extra, after wrapping up her nasi lemak in wrapper. Such a kind lady.

I also bought this pulut panggang with sambal filling from the stall. RM1 each. I had it after my lunch. 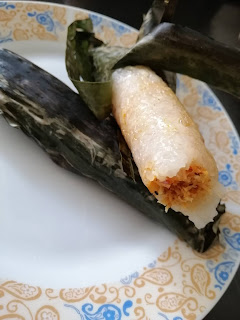 I love the Malays. They are always very pleasant, so very nice, not calculative, very generous!

Pulut panggang looks delicious! So kind of the lady and your husband is right to insist to give her more.

Indeed very nice lady who doesn't mind giving extras and not charging.. not calculative at all...

i have never eaten kolo lau shu fen...hard to find in KL. The nasi lemak seller is so kind.

I like the look of the char siew in your kolo lau shu fen.