Do you fancy Shandy? 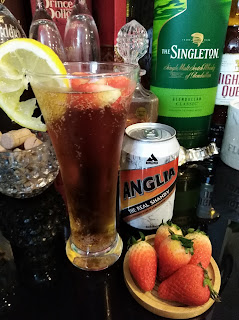 I know I do! I don't take beers that often. More of a cocktail and red wine person.

But I have a soft spot for Shandy as I grow up loving it at a very young age. The 1% alcohol lemonade-infused beer was the closest beer we could get at home as my parents don't drink.

I love the chill and refreshing lemonade beer anytime. And to make an even delightful drink, why don't add a bit of fruity flavour of strawberry into the Shandy? 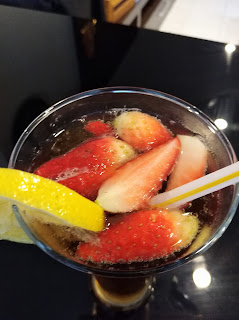 Bought a pack of super nice, super sweet Korea strawberries from a local supermarket not so long ago. I don't remember I ever tasted such sweet strawberry before. Mostly with a tart of sour in the fruit but the Korea strawberries that I bought were so sweet. Wish I bought more packs then. 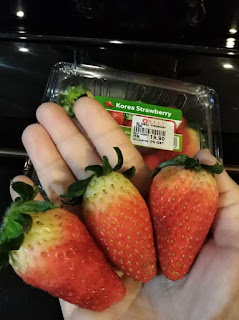 So that was how my idea of adding strawberries to my Shandy started. All these while I were enjoying a can of Shandy and snacking on some fresh strawberries.

If you don't have Shandy at home, just mix beer of your choice and juice of one lemon (sliced and deseeded).

Ingredients:
1 cold can of Anglia Shandy beer
A slice of lemon
2 strawberries, quartered

Methods:
1. In a serving glass, add in the strawberry to the shandy. Garnish with lemon or you could add into shandy for more lemony taste. Add some ice (optional) and serve cold
Posted by Rose world at 1:09 PM

I love shandy too but I have never tried adding strawberries. Sounds interesting!

Must be a very refreshing drink. I love to eat strawberries but I have not drank shandy for many years now.

hahaha.. I really thought the strawberry shandy is in the market until I read your post! How nice if it is... I also don't like beer, too bitter taste for me, I still prefer sparkling sweet wine..

Yes, I love Shandy too! But now I find it too sweet, so have stopped drinking.

Wah sounds very refreshing but I don't know if I love Shandy or not. Rarely drinks it. I'm also a wine person.

I like to drink very cold Shandy too! This is really an innovative idea to add strawberries! I believe this is good.

I feel so thirsty after seeing this, Rose! You sure know how to tempt people. Now I feel like I need to make one for myself ..haha! Shandy is my kind of drink too ..not much alcohol in there and pleasant tasting.

Strawberry from Korea are sweet ya...