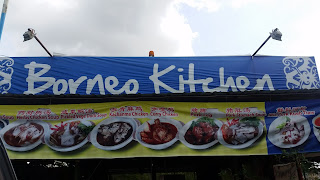 Not full at all, just few tables occupied maybe by the patrons waiting for their cars to be washed next to it. No, we didn't get our car washed as it was a long queue. 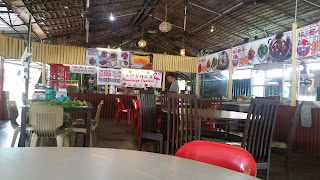 Only one food stall opened that afternoon. Amazingly, it serves quite a choice of food such as claypot dishes, Hainanese chicken rice, Hakka noodle as well as Thailand pork knuckle rice. The later one had me all curious and drooling. Lol. 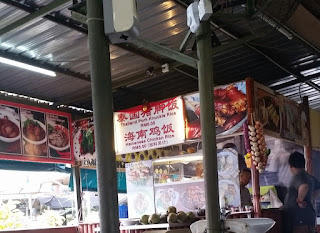 So we decided to have our lunch there and ordered whatever they had from the only stall that opened that afternoon.

The boys had the Hakka noodle. Looked and tasted delicious, according to Jay. He and Jamie shared 2 bowls as Jay complained the portion was too little for him. 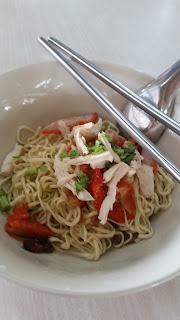 The noodle also came with a bowl of wanton soup. 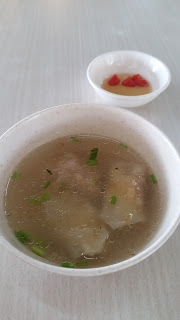 Next came this piping hot bitter gourd pork ribs soup. Something to cool ourselves down. I were down with sore throat so I liked the bitterness of the soup. To soothe the throat. 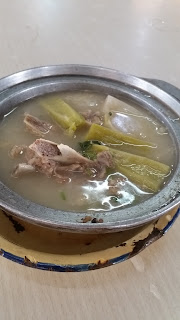 Our so-called Thailand pork knuckle rice. All the goodness in a plate!! For RM6, I thought it was worthy. 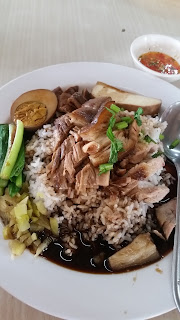 What I liked the most was the dipping. Spicy and flavourful. 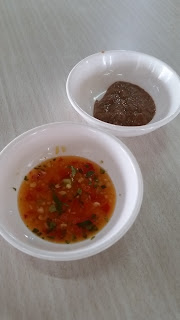 Maybe we can drop by again in the evening to try other stalls.
Posted by Rose world at 8:43 AM

Yes, RM6 for all that meat, definitely worth it!

The Thai pork knuckle rice is cheap and looks delicious.

Jay is a growing boy so that portion is not enough for him.

I should try it too. Have u tried Eating at Lepau? They serve delicious dayak food.

I'm yet to find a fondness for bitter gourd. I keep trying it though.

The Thailand Pork Knuckle Rice must be very tasty! At RM6 really worth it.

Me is no thank you to bitter gourd...