This lunch was all prepared and cooked by hubby when he was at home on one Monday morning.

He watched a cooking show the night before and eager to try and cook for the family. So together with me, he went to buy the necessary ingredients on Monday and get down to cooking. Talking about eager cook who seldom get into the kitchen!

According to the cooking show, this is a Hainanese cuisine.  I liked the dishes as they were simple, no hassle and all natural taste. 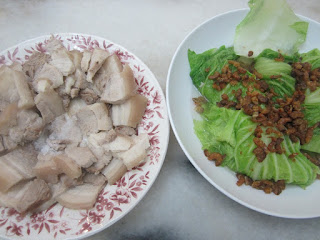 
With my hubby as the chef and I were the sous chef, our lunch was ready in less than 1 hour.

1. Bring a pot of water to boil and add the pork belly. Let it cook for at least 30 minutes.
2. In a pan, fry the dried shrimps till crispy. Drain on a kitchen towel. Set aside.
3. Take the pork belly out and let it cool down before slice in biteable size.
4. Arrange the pork belly in a plate, leaving a hole in the middle. Add few tsp of sea salt. 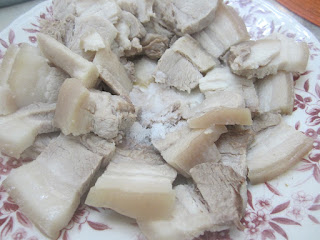 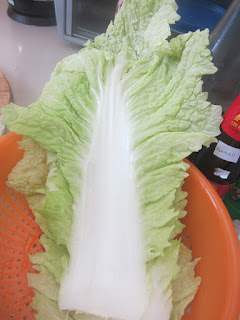 5. In the same pot of boiling water, toss napa leaves one at a time. Let it cook to soften.
6. Drain the cabbage and let it cool slightly before roll the cabbage from the white stem to the green leaves. Place in a plate. Do the same for other leaves. 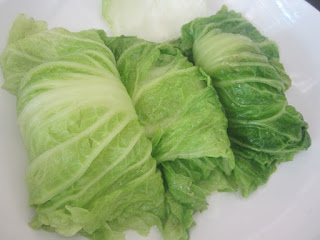 7. Toss the dried shrimps on top of the cabbage leaves. Scoop some of the boiling soup on the rolls. 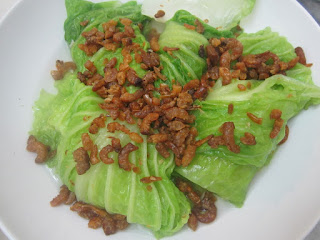 Pork belly - dip some salt before you enjoy it
Cabbage roll - cut the roll into 3 parts so it is smaller piece. You could add a pork belly in the roll as well as some haybee before eat

The original recipe called for santan (coconut milk) to be add to the boiling water for cooking the cabbage leaves but we did not have any at home, so we omit it.
Posted by Rose world at 1:09 PM

Wah! So nice to have hubby as cook and you as helper. Looks good and simple and fast to cook. Maybe I will have a try too.

The Koreans also have something like that and of course, if it's Korean, the ladies in the house love it so so so much.

Clever couple!! With the internet, everything can be "researched" online.. Nowadays I also look into youtube for learning lessons.. Line dancing.. not cooking.. hahaha...

both of you have a good partnership in cooking! well done!

I hardly watch cooking show as me lazy person to cook...

That is so nice of your hubby. Mine can only boil water. Haha.

Looks good the dish. I like simple and delicious meals.

You guys are what I call a sweet and loving couple ;)
How nice to do things together!

I wanna find such hubby who interest in cook too :)