UPSR is over and the dad promised the kids some fun family outing. So that Saturday, we went to Borneo Samariang Water Park.

Hubby's brother and family tagged along and with 6 kids in tow, you could imagine the craziness and shriek when they let go of themselves. 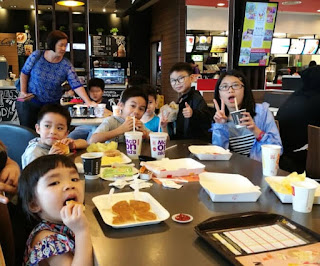 But first, we had our breakfast in this fast food franchise chain. Then we drove to Samariang, which took us about 40 minutes drive from new Matang bridge in Stapok. 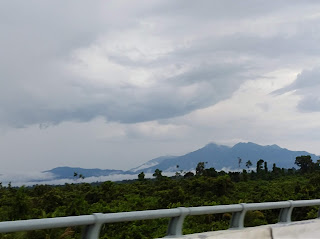 From far, we could see the under construction resort hotel before the view of the water park appeared behind it. 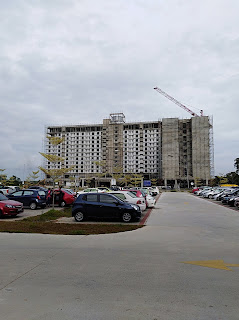 Imagine the excitement of everyone to see this first-ever water theme park in Kuching. 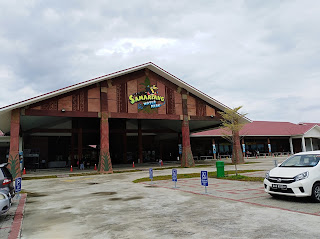 It was not yet 11 am, so not many people around. 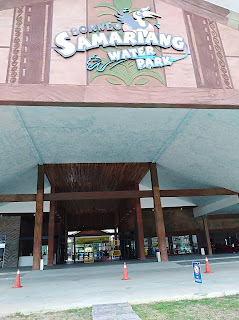 No long queue at the ticket counters and how surprise when we knew that they had promotion that day.  RM33 for adult (normal RM38) and RM23 for children (normal RM28). 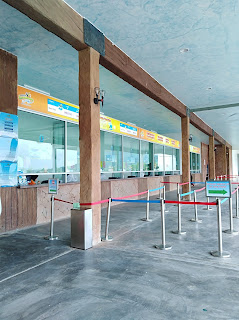 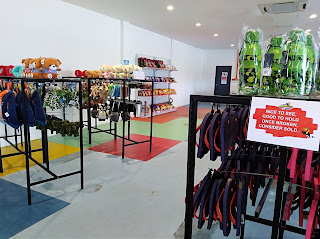 We brought a large sized locker so we could fit everything in. 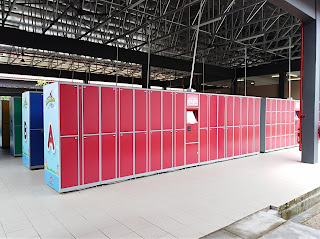 The locker section, changing room, bathroom and tube rental are next to each other. 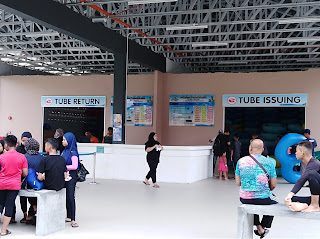 Opposite is the cafe. They have some selection of local food and snack combo. No outside food and drinks are allowed. And no cash transaction in the water park. You need to top up at the ticketing counter prior to entering the premise but top up counters are around for convenience when you need to top up cash.  They accept credit card too but only at the top up counter in front of the lockers. 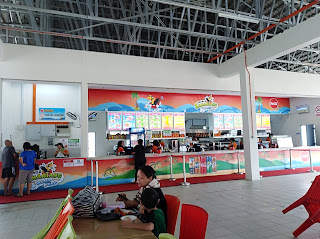 We were given wrist band each. So now we were all set to play! 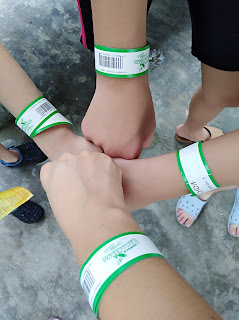 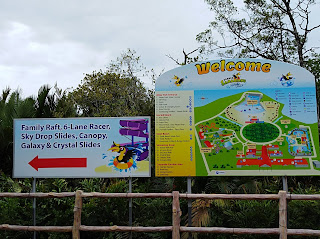 The directive signs were clear around the park but you could ask for map if you want to at the ticket counters. 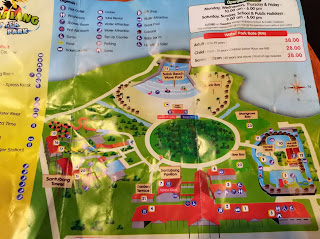 First, let's the adults have fun. We went to Santubong Tower to play all the thrill rides. We tried all the rides except the sky drop as it wasn't ready yet. This mummy climbed the stairs 7 times to play the rides. And only the next day, my calves were aching from all the exercise. 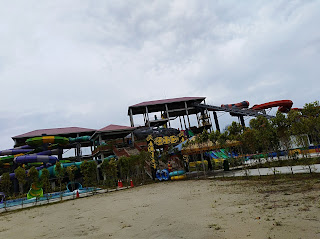 The younger kids can't play as minimum height allowed was 110cm. Jan and Jay were really enjoying themselves there. My dare-devils. 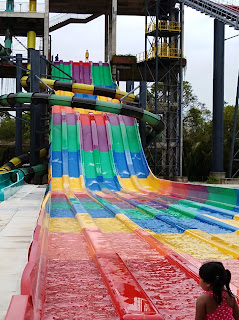 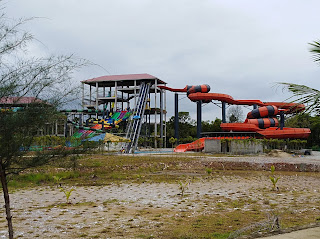 Next, we went to the Salak Beach where man-made wave pool was and everyone had fun in the water as well as on the  sand beach. We spent the most time here. 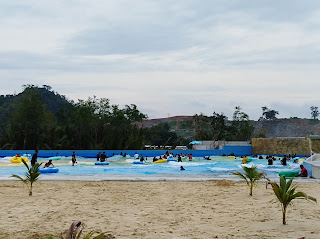 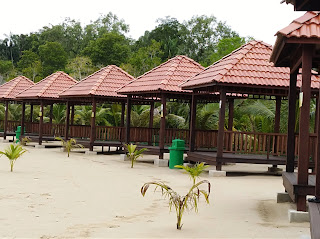 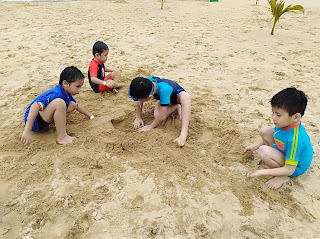 The last attraction was mostly for the kids, the Hornbill Island. 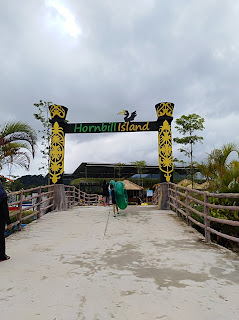 We spent quite some time there as we also had our lunch before heading back to the beach and replayed some rides in the Santubong Tower. 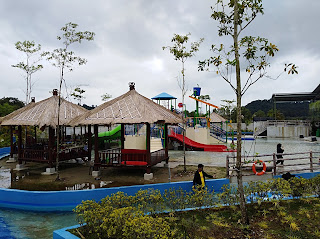 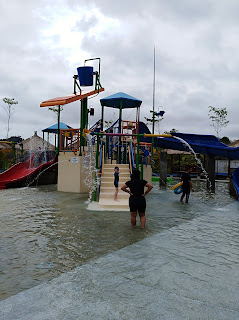 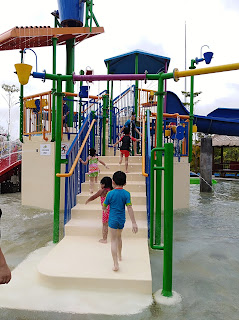 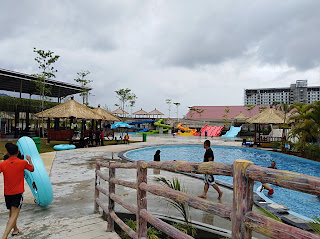 Overall, we spent almost 5 hours in the water park. It was fun and tiring but a great family outing. And my kids had been asking to come back again! Lol. 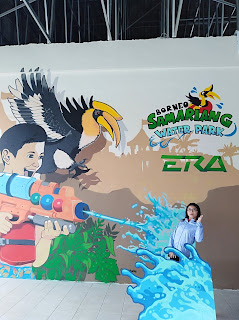 great family outing! and the weather was nice too!

I am sure the kids are the happiest of them all! They deserve a good break after the exams, sure!

No, thank you! Not since I slipped and fell at Sunway Lagoon and broke my arm born - did not rejoin after two months and had to go for surgery at Normah. The steel plate and six screws are still inside - will set the alarm off when I go through security at the airport. LOL!!!

I have only been to a water theme park once and that was many years ago. It is a great place for the whole family to enjoy the different activities.

Fun time for both the kids and the adults! I am scared of some rides, I am too coward to get on it hah..hah...

Wah! The place sure look nice and spanking new!

What a fun time for the children!

Wah best! Children and water park will always spell FUN FUN FUN and more FUN! I can foresee your kids coming here again in the near future since the mummy had so much fun herself. Haha.

No thanks to some of the rides as I am too scared.

Can see that the kids enjoyed themselves and the mummy enjoyed herself too! What a fun filled day!

And what a pleasant surprise to know that they have promotion for that day :)

This seems like a nice place for family and kids to spend their time having a lot of fun! :)

Such an awesome place for family fun! ^.^
Aah ..I wish I lived nearby.

What a happy family outing with so much fun and laughters. This is priceless!
Hope you will have more such outings as everyone enjoyed the fun.