(A big warning : A very long post so you may fall asleep half way through the post. Don't say I didn't warn you first! ^^)

I know, it is not easy to potty train the little one but sooner or later, we got to do it. Depends on the children, some learn fast and dry in few weeks while others take longer time to get a hold of it. It is matter of the children' mindset and readiness to embrace this big milestone.

For instance, Jan was totally off diaper and never wet herself or bed before 3 while Jay was off before 5 (he is diaper-free for over a year only)! And once in blue moon, Jay wet his bed while sleeping and he is turning 6 in five months time!

Telling you the truth, it was not me who potty trained my eldest and second child. All done by their nanny and I just followed through. So it is the first for me to fully train my youngest on my own. A real challenge to my patience and perseverance.

I thought I should get Jamie started now since he is 1.5 years old. Diapers are super expensive (with or without GST!).

I have tried to introduce him the little potty in the bathroom since we were back to Kuching in November. He was 14 months old then. He was curious and play with it when ever I bathe him. I keep telling him that it is for his pee but he prefers to add some water into it. Lol.

I tried again to potty train him when he was around 16 months. He knew how to say "pee" and "poo" when ever he has the urge but every time I put him onto the potty, he reluctant to do so. So I did not forced him that time. Failed 2nd time.

I let him see when ever his brother goes to toilet. What is better than seeing a person doing it? Hopefully it would ignite his curiosity and natural instinct when it comes to the day he is to sit on a potty. And when ever he bathe, I will get him to pee. Successful few times but mostly all goes to the floor than into the potty. Nevertheless he got a cheer and clap from me.

So, I decided to try again last week. A half-day training and now he knows what potty is for. How happy both of us are when he pee into his potty and flush it away into the toilet bowl.

Once he is awake in the morning, I will take off his diaper and bring him to the potty. I also let him to help me to throw his soiled diaper into the bin. How happy is he when he gets a big clap from me every time he throws it away.

{Day 1 & 2}
I started off with few hours in the morning on 1st 2 days. Gave him fit easy diaper pants to wear and make a big deal out of it. He was reluctant to wear the fit easy pants initially as it was his first.

A nightmare on first few days as there were wetting accidents on the floor. No scolding or grumbling but sweet talk and encouragement with the little one. 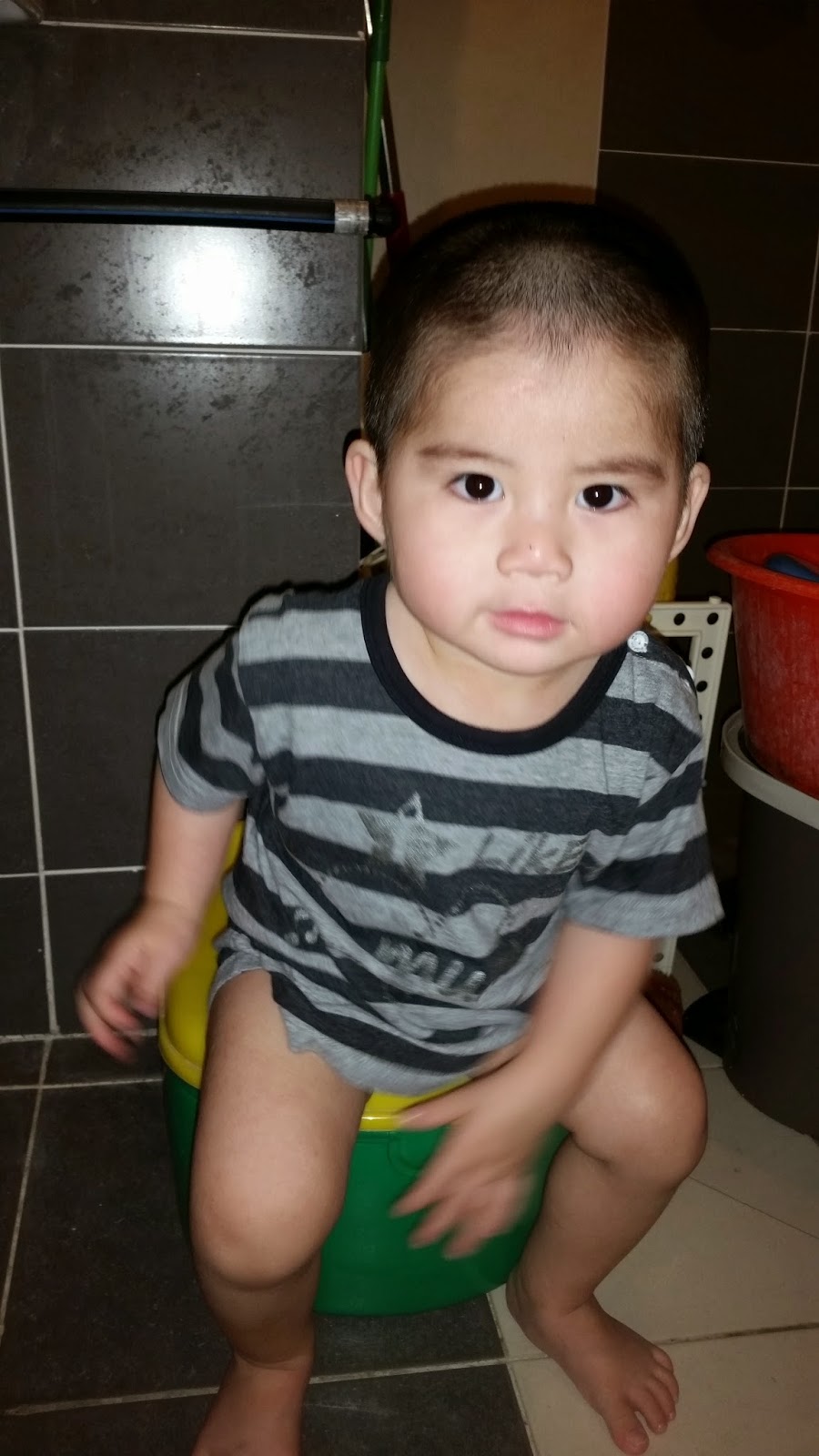 Sit or not to sit

{Day 3}
From bathroom, I moved the potty to the living room so he can see and know why it is there. I also did not let him wear anything other than pants and asked him to sit on potty every hour. At some point of time, I let him naked from waist down as he kept wetting his pants and not in time to reach the potty. 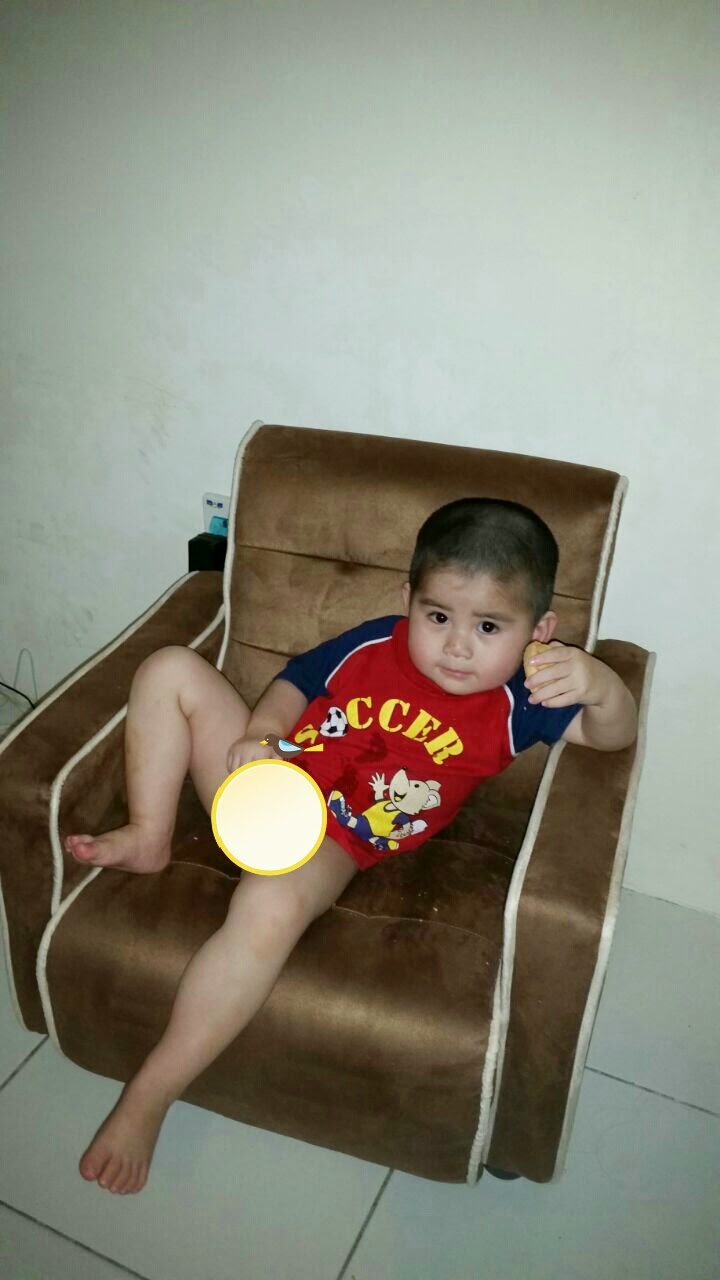 Oopps! Where is my pants, mum?

{Day 4}
Noticed that he would point or go to the potty when he has the urge. A big improvement! He would tug on his pant and shirt and try to pull down his pants (or easy fit pants when he wearing one). Lesser leak and more willing to sit on the potty. He prefers to stand more than sit on the potty while pee so it is hard not to wet the floor. Boys! 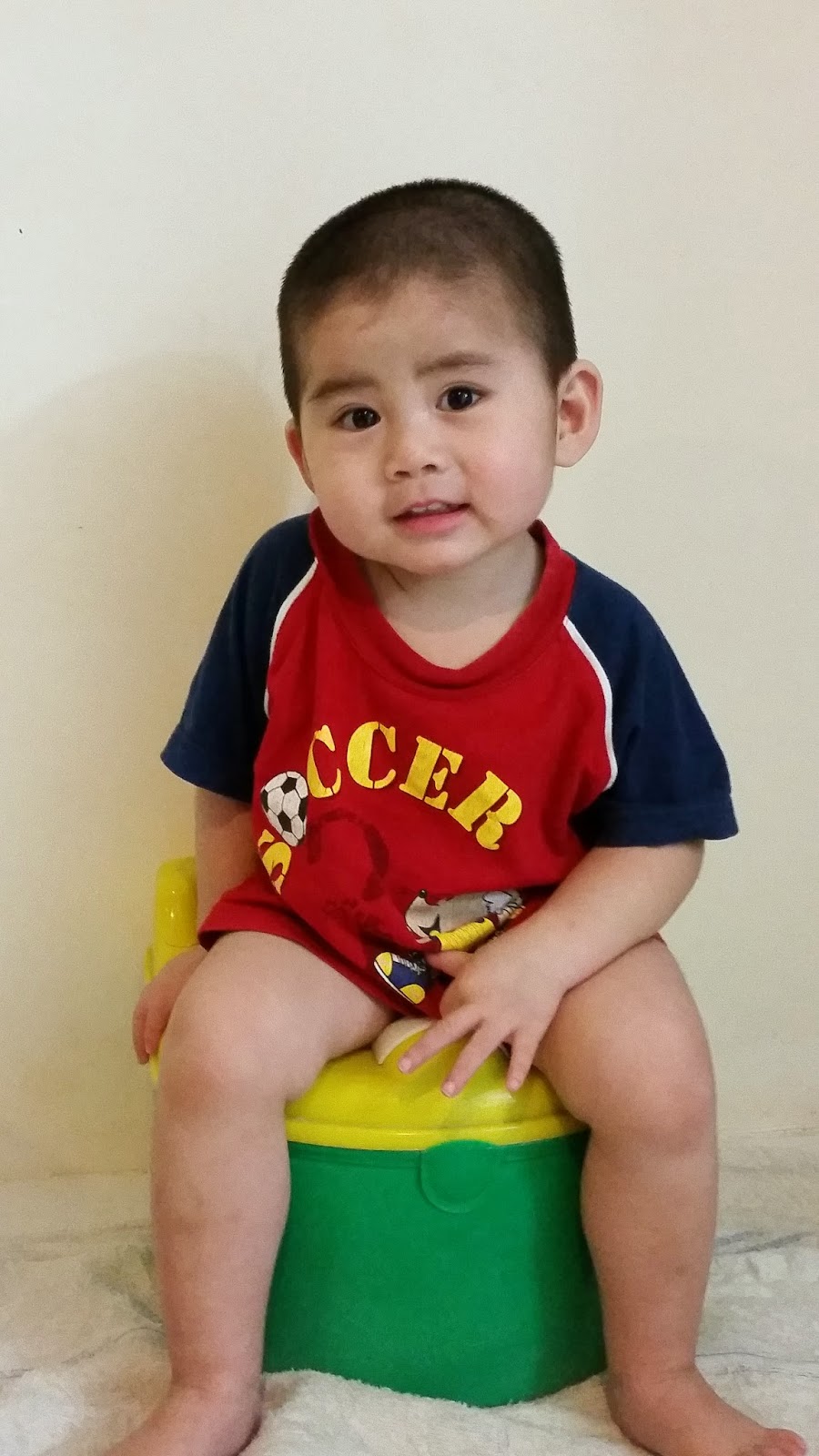 {Day 7 onwards}
He goes diaper-free during the whole morning and sometimes in afternoon (except when go out and sleeping). Now he would not want me to put diapers on him and keep going to the bathroom whether there is pee or no pee just to sit on the potty and wash his hands. I find it is easy for him to pee standing up. Maybe he watched his brother doing it so he followed.

As reward, I give him some treats. His favourite, chocolate balls. And soon I will need to hunt for his undies. I am sure he would be happy to wear those undies with cute cartoons in front.

Still a long way to go when he will be totally diaper-free, less wetting accidents and stay dry but I am glad I did it.  Hang on there, Jamie. You can do it!!

Kz starte tadika at age 3 and the tadika potty trained him and all the kids there.. They dont mind if kids wet their pants, they just mop it.. Then after few weeks, done!

Rose, you are doing a very good job. Very soon cute Jamie will enjoy wearing his undies, no more diapers.

Rose, I think you are doing a great job. Cute photos. :)

Hahahahahahahaha!!!! I love that 2nd pic. So endearing your little boy.

Thanks goodness potty training was totally fuss-free when my kid was young! I can understand the frustration, but hang in there, you're doing a good job.

I brought Ayden to the bathroom first thing in the mornings too. He usually doesn't wet his diaper at night but we still put it on for him in case there is accidents.

I bought training pants for my kids for this purpose last time. I find it very useful.

Well done. I didn't really experience that as most of the job done by my wife but my daughter 'graduate' faster than my son then.