It was the first Sunday of the month. A very wet day to start with. Rained since the night before and continued till the next morning. Due to the rain, hubby and I woke up late that morning for a breakfast appointment.

A family friend of my parents (also the father of my godbrothers) had suggested to my hubby the day before to meet up for breakfast in Kenyalang hawker market. That sounded good as it has been ages since we gone to Kenyalang for its market and breakfast.

The breakfast was fixed at 6am but both of us only woke up that time that day. Blame us for not setting alarm for that!! Hubby usually wake up earlier but somehow he overslept. The weather was too nice to sleep in. Lol. Anyway, we still rushed to Kenyalang which took us about 20 minutes drive or more as it rained. As it was Sunday, we parked out car a bit further and we walked over to the market to avoid congestion near the market area. Uncle and my parents has left by the time we walked over so we missed them by a nick of time. Anyway, since we were there, we bought some vegetables in a mart. We didn't go to the hawker market since uncle and my parents have gone home. 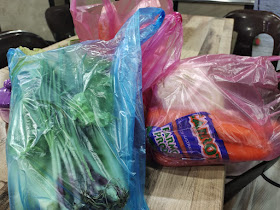 After done with the shopping, I suggested to hubby to have Sarawak laksa at this coffee shop where my mum and I used to patronise. Both of us enjoyed its Sarawak laksa back then. So, hubby and I had a small bowl of that for RM7 on a cold, raining Sunday morning.

Good Day food court was the name of the eatery. Just behind Everwin Supermarket building. Hubby commented the broth was nice and lots of ingredients for a small portion.

Before we left, hubby went to the kueh stall in the food court to check out on what they have. He ended up with these kueh and 2 packs of nasi lemak. As for the kids, we bought 3 packs of kolo mee (stall next to the Sarawak laksa stall) for them. No photo taken.