Everyone woke up around 730am. I cooked instant noodles for kids and myself in the morning. Hubby came back after 9am with his fishes. After took care of the fishes and his stuff and he took his shower, we went to an aunt's house and then my parents' house to passthem fishes. A blouse for my mum that I bought online few weeks ago.

We spent slightly over an hour there before we said goodbye to them. Jan had an online piano class that Sunday afternoon so we needed to reach home by 1pm. It was the Sunday before Hari Raya so it was rather jam in Batu Kawa but luckily, we were just in time for her online class.

While on the road, my man ordered our lunch. Since it was Mother's Day, we had a nice lunch treat from him. Japanese cuisine. Yes, it has been a while since we had a nice and decent Japanese meal.

Oishi Japanese restaurant in Rock Road was our option. We had never been to the outlet before so it was our first order from Oishi. The food delivered by Grab, came in trays and containers in less than 30 minutes later. Let's have a look at what we had. 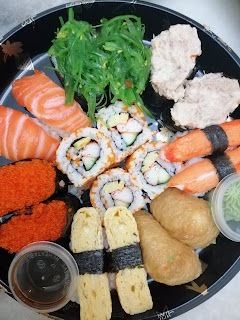 A California set, consisted of some of our favourite sushi. The wasabi was good, I liked it.
Hubby ordered this Salmon bento for me, which I enjoyed very much. 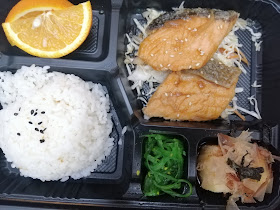 Jan had the chicken teriyaki bento. She rarely take chicken when we goes for Japanese so it was her first time ordered a chicken bento. Usually she goes for unagi don. 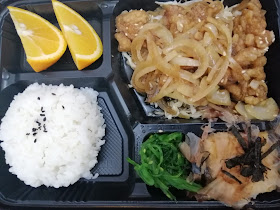 As for the boys, hubby ordered ramen.  One was chicken teriyaki ramen while another was yakiniku ramen (beef). 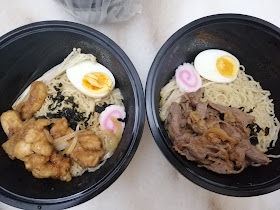 I took photo of both ramen before pour in the broth. 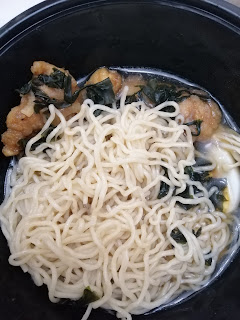 Total cost was RM118.60. Was everyone happy with the lunch? Yes, I quite enjoyed my bento and sushi. And the kids when asked how was it, they simply replied with a thumb up. I guess it was delicious (oishii!). 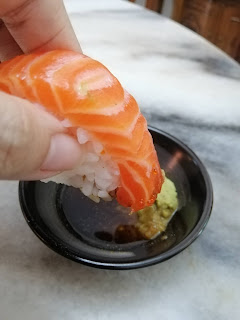 Thanks hubby for the nice Mother's day lunch. ❤️